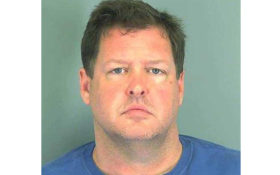 It’s a horror story straight from a scary movie — A woman missing since August was found “chained up like a dog” inside a storage container, a South Carolina sheriff said Thursday.

And the victim is suggesting she isn’t the only victim.

Spartanburg County Sheriff Chuck Wright said she had a chain around her neck and told deputies she had been kept in the container for two months.

She’s likely not the only victim. The women told authorities there could be four bodies buried on the property.

Deputies, acting on a tip, found the victim after hearing her banging on the container from the inside Thursday in the town of Woodruff, 80 miles northwest of the state capital of Columbia.

The sheriff said the container measured 30 feet by 15 feet by 10 or 12 feet. It was chained and locked.

Anderson Police Chief Jim Stewart said his department’s investigation into the disappearance of the woman and Charles Carver, her 32-year-old boyfriend, led authorities to the property near Woodruff where the woman was found. Carver is still missing.

Stewart said more than a dozen search warrants were issued.

“We got computer and cellphone records that ultimately led us to the area in Woodruff,” Stewart said. “We knew that was the last place that a cellphone tied to this case pinged.”

The sheriff said a registered sex offender identified as Todd Christopher Kohlhepp has been arrested in connection with the incident. A hearing was expected Friday afternoon.

Wright said the woman worked for Kohlhepp, and was, “in good spirits and looked good.”

“We’re trying to make sure that we don’t have a serial killer on our hands,” he said.

Records indicate Kohlhepp is a licensed real estate agent as well as a licensed pilot. In 1986, he was convicted and sentenced to prison for kidnapping and dangerous crimes against children.