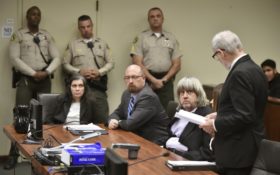 The community college student with a page-boy haircut was quiet, never drew attention to himself and earned A’s semester after semester.

Despite ample opportunities, he apparently never divulged the sickening truth that his home was a veritable torture chamber.

Authorities say the student, now about 26, was the eldest male among 13 siblings who were held captive in their California home by their parents, David and Louise Turpin.

The couple starved all but their 2-year-old daughter for years and sometimes chained their children to beds for months at a time without letting them use the toilet, prosecutors said.

However, Louise Turpin regularly drove her oldest son to classes at the nearby Menifee campus of Mt. San Jacinto College and waited outside the classroom for him.

He was on the president’s honor roll in fall 2015 and spring 2016, college spokeswoman Karin Marriott said.

A transcript obtained by ABC News showed he attended classes from 2014 until at least 2016 and took up to 15 credits a semester. He earned A’s in many classes, including algebra, guitar, public speaking, English fundamentals and freshman composition.

A classmate, Marci Duncker, said he was “always quiet and alone” when they attended classes. She tried to say hello to him a few times but he just looked at her and never responded.

“It was one of the most sad faces I’d seen in years,” Duncker said.

The boy was usually one of the last people to leave class, she said.

None of the names of the abused siblings have been released by authorities and all were taken to hospitals when they were freed two weeks ago from the home in Perris, about 70 miles (113 kilometers) southeast of Los Angeles.

Authorities say the abuse was so long-running their growth was stunted.

Despite near-daily interactions with others outside the home, there’s no indication the oldest son ever sought to draw attention to what was happening at home. Gale Kelley, a trainer for the International Association of Trauma Professionals, said that reluctance is understandable.

“They were born into this. This was normal for them. Some of them may not even realize they’ve been abused,” she said. “These children have been living in isolation so they only know what they know.”

Abusers often tell children they shouldn’t talk about what happens at home or that they deserve to be treated that way, and that may have made it difficult for them to escape, she said.

“We don’t know what kind of duress they were under as far as threats,” Kelley said. “They’re still seeing the world through the eyes of a scared little kid who is in constant danger.”

The case has drawn international attention and compassion for the children.

The younger ones were home-schooled and there’s no evidence the other older children were educated outside the home, except for the oldest girl — now 29 — who had attended kindergarten to third grade in a public school in Texas.

Sheriff’s deputies rescued the children on Jan. 14 after the Turpins’ 17-year-old daughter climbed out a window and called 911.

The house reeked of human waste and evidence of starvation was obvious, with the oldest sibling weighing only 82 pounds, Riverside County District Attorney Mike Hestrin said.

The parents were arrested and pleaded not guilty to torture and other charges.

The siblings, seven adults and six children, will likely need years of therapy, psychological experts said, adding that if possible it would be best to keep them together for now.

“They’re going to have some developmental delays, no question,” said Russell Rice, a family therapist and executive director of a California residential treatment program for teenagers in Redlands. “Their brains are going to be as stunted if not more than their physical development.”

Rice said more independent options exist, for example, a residential complex with a case manager on site to assist with money management or other programs. But he said that could be overwhelming for people who have been sheltered from the outside world.

“They don’t even know how to shop, probably, and the concept of money,” he said. “They won’t be living on their own. They’ll be highly supervised for quite some time.”

The repeated exposure to traumatic events could make them skittish when they are out in public.

“The children have been in constant crisis mode, constant danger, and so that switch gets turned and it is always on,” Kelley said. “They’re expecting to see trauma everywhere and in everybody.”