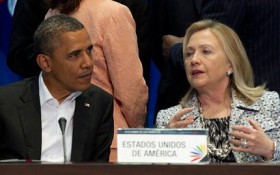 The race for the 2016 Democratic presidential nomination was supposed to be a coronation of sorts for former Secretary of State Hillary Clinton.

The Clinton camp may be secretly blaming one man for most of these troubles — President Barack Obama.

Evidence continues to mount that the Obama Administration may be actively working to keep the Clinton campaign from getting off the ground.

It’s no secret that Clinton and Obama have had a frosty relationship since a contentious 2008 Democratic primary battle, and Obama may never have been sold on the idea of Clinton succeeding him.

And now Vice President Joe Biden is being nudged to run against Clinton, a move that has left former President Bill Clinton furious according to numerous media outlets.

But the biggest bombshell may be the growing speculation that the Clinton campaign blames Obama for the ongoing scandal involving emails sent on Clinton’s personal server while she was Secretary of State.

According a book just released by veteran journalist Ed Klein, Clinton suspected Obama aides leaked the story about her private server to the press. And at a tense Oval Office meeting, she reportedly exploded at Obama and told the president “What I want you to do is call off your f-king dogs, Barack.”

Obama, according to Klein, was taken aback by the outburst and told Clinton he wouldn’t help and that her problems were of her own making.

While the Clinton campaign took issue with Klein’s version of events, former Bill Clinton advisor Dick Morris told “The Steve Malzberg Show” last month that the Clinton camp does indeed believe that Obama and his aides are fueling the email scandal.

“From the Clinton point of view this is all a set up by Barack Obama, Michelle Obama and Valerie Jarrett,” Morris said. “The three of them.”