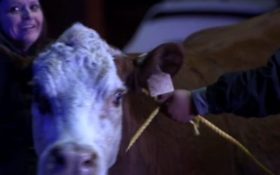 A cow that escaped twice from a nativity scene in Philadelphia is back in place.

The cow, nicknamed “Stormy,” wandered away from the nativity scene at Old First Reformed Church of Christ Thursday and ended up on Interstate 95.

Philadelphia police eventually boxed in the cow with their cruisers before walking it off the interstate and returning it to the church.

However, WPVI-TV reported it was not long before the cow took off again despite efforts by the Rev. Michael Caine to stop the animal.

The bovine was found on the fourth floor of a parking garage before it was taken back to the nativity.