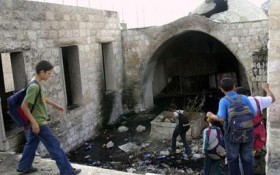 As part of a “Day of Rage,” dozens of Palestinians threw firebombs at a West Bank site revered by many Christians and Jews as the tomb of biblical patriarch Joseph.

The tomb has become a popular prayer site in recent years among some religious Jews, and is also considered a holy site in Christianity.

The arson comes at a time of heightened tensions between Israel and the Palestinians.

Overnight #Palestinians set ablaze Joseph’s Tomb, in a blatant violation of the basic value of freedom of worship. pic.twitter.com/qsOCRFg205