Hollywood hotshot calls cops murderers... and their response was PERFECT - The Horn News 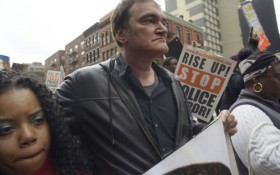 Did the director of “Kill Bill” just kill his career, too?

Hollywood film director Quentin Tarantino took to the streets of New York City this weekend to join crowd’s protesting the police — and he practically accused cops of murder.

“I’m a human being with a conscience, and if you believe there’s murder going on then you need to rise up and stand up against it,” Tarantino said. “I’m here to say I’m on the side of the murdered.”

And while Tarantino chose not to support America’s hard-working cops, the union representing New York City’s police officers is asking the public to stop supporting Tarantino.

While Tarantino was exercising his freedoms, the union representing New York City police officers is asking millions of Americans to exercise theirs.

Patrolmen’s Benevolent Association President Patrick Lynch is calling for a full boycott of Tarantino’s films, which include “Pulp Fiction,” “Reservoir Dogs” and many more.

“It’s no surprise that someone who makes a living glorifying crime and violence is a cop-hater, too,” Lynch said. “The police officers that Quentin Tarantino calls “murderers” aren’t living in one of his depraved big screen fantasies — they’re risking and sometimes sacrificing their lives to protect communities from real crime and mayhem. New Yorkers need to send a message to this purveyor of degeneracy that he has no business coming to our city to peddle his slanderous “Cop Fiction.”