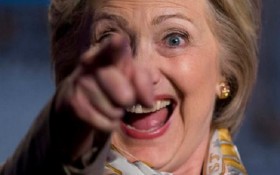 Twice-failed presidential candidate Hillary Clinton may not have much time left.

The beginning of the end for Hillary — that could end with her finally thrown behind bars — starts on Jan. 15.

That’s the date a report on the on the investigation of Hillary’s email server is set to be delivered by Inspector General Michael Horowitz. For a year, Horowitz and his team of 500 agents have quietly moved forward on the investigation of Hillary’s email scandal and the Department of Justice’s mishandling of her case. They’ve amassed 1.2 million documents, and they’re scheduled to be delivered Jan. 15, 2018.

What’s in them? Former Justice Department official Michael Bromwich said the report will upset “a lot of people” because of how damaging it will be to Hillary and her pals.

“Michael [Horowitz] is a very solid guy with exactly the right background for the job. It’s a job that doesn’t make you many friends,” Bromwich said . “And I don’t think a lot of people will be happy when it’s over. But I think he is going to call it as he sees it.”

Already, this quiet, behind-the-scenes investigation has proven fruitful for President Donald Trump and his political allies.

Horowitz was behind the revealing text message scandal that has rocked special counsel Robert Mueller’s investigation and led to two biased FBI insiders, Peter Strzok and Lisa Page, being dumped from the team.

“For months, Horowitz’s investigation — which has amassed interviews with former Attorney General Loretta Lynch, former FBI Director James Comey and other key officials — had been grinding on in near anonymity,” USA Today reported. “That is, until earlier this month when the inspector general acknowledged that Mueller was alerted to a cache of text messages exchanged between two FBI officials on his staff that disparaged Trump.”

The results of the inspector general’s investigation into Hillary’s misdeeds and the alleged cover-up by former President Barack Obama could be a “landmine” for Mueller and the rest of the Democrats, USA Today concludes.

If they show there was an illegal cover-up to help Hillary win the 2016 presidential election, conservative critics of the Clintons could also — at long last –get the justice they’ve asked for.

Do you want to see Hillary Clinton FINALLY locked up?