Report: Hillary running for president again in 2020 - The Horn News 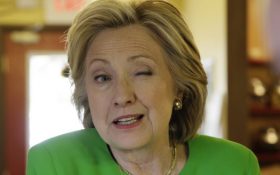 Anyone looking for proof that the Democratic Party is bankrupt when it comes to ideas just needs to see what’s taking place behind the scenes right now.

There’s no obvious roster of front-runners for the 2020 election.

There’s no one who seems even close to ready.

So the party may turn to… you guessed it, Hillary Rodham Clinton!

Politico reported last week that Clinton’s team appears to be quietly laying the groundwork for another run.

The website’s Matt Latimer notes that Clinton herself seems to be getting her ducks in a row already with a new book deal and her decision to keep poking at Trump on Twitter.

She’s even scaled back the Clinton charity, which often looked like a slush fund for family and friends and helped lead to the “Crooked Hillary” nickname she was tagged with during the campaign.

“Barring some calamity, Clinton is running,” Latimer predicted. “Not only will Clinton run again, she has an excellent shot at getting the Democratic Party nomination again.”

Yes, Hillary Clinton for president in 2020, when she’ll be 73 years old on Election Day.

None of that seems to matter to the power-hungry Clintons, who have spent some four decades either in power or pursuing it. Clearly, they aren’t planning to stop now.

There’s talk she’s even working on a warmup: A run for mayor of New York City this year, with The New York Daily News reporting that she has discussed the possibility with a “top Democrat.”

In nearly any other city, that would be a local office that wouldn’t attract any attention.

But the mayor of New York is often a national figure with a national platform. Just look at how Michael Bloomberg abused his office to push a Nanny State agenda not just on New Yorkers, but all across America.

Clinton could use the office to keep her name in the spotlight, attack Trump and raise money for a new bid for the presidency.

But if she runs… even many on the left believe she could guarantee a second term for Trump, because Americans are just plain sick of insider politicians and their cronies running the show.

“Trump beat Clinton with a simple message: She is the status quo you hate; I am radical change,” wrote Chris Cillizza of The Washington Post. “She’s a politician; I’m not. She is of Washington; I hate Washington.”

Even after four years as president, he wrote, Trump would still be able to position her as the insider and himself as the outsider still cleaning up a dirty town.

“Democrats have learned nothing from Trump’s victory and if anything, the DNC has retreated into its neoliberal bubble,” wrote columnist H.A. Goodman. “If you can’t stand Trump, get ready for two terms once #Hillary2020 becomes reality.”