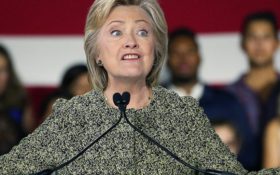 “On the Holmes Front” with Frank Holmes

Hillary Clinton may have lost the last election, but she is consoling herself by squeezing every last cent out of her failed campaign – and shaking down new donors – for her personal enrichment.

Clinton spent a record-breaking $1.2 billion on her losing 2016 presidential run against Donald Trump – but when she lost, she still had money left over.

All those stacks of cash just sitting around got Hillary’s wheels turning – and her hands rubbing together.

First, she decided to wring every drop of money she could out of her campaign’s wreckage.

Then Hillary turned around and demanded that the Democratic Congressional Campaign Committee pay her another $700,000 for the same list – giving her campaign a cool $2.4 million.

But even that wasn’t enough. Hillary claimed the list was worth $5 million, so she got a tax write-off topping $3 million for the list as an “in-kind contribution,” too.

By way of comparison, Barack Obama donated his entire list to the DNC, free-of-charge – but the Clintons were just getting started.

Second, Hillary used a huge chunk of that new income to raise even more money.

She shifted $800,000 from her campaign apparatus to start a new “resistance” group called “Onward Together.” But so far, the 5019(c)(4) organization has done virtually nothing except rake in more donations from suckers.

“Sometimes (losing candidates) do this to pay off campaign debt, or, to keep their war chest full if they were to ever seek office again,” wrote the Center for Responsive Politics. So, the funds could give Clinton a nice little boost if she decides to run for president again in 2020, as multiple sources say she plans to do.

The law only holds out one bright red line: Candidates have to keep their own hands out of the till – no payments for themselves of their family.

“The overarching rule is that it can’t be converted to personal use, but that it can be used for any other lawful purpose,” said a Campaign Legal Center attorney named Paul Ryan.

But these are the Clintons – and they can’t just leave money alone.

So third, Hillary decided to help herself to some the leftover campaign cash with a quick bit of paper shuffling.

Campaign documents show that her campaign has paid $150,000 since last May to a group called ZFS Holdings LLC.

Guess who that is? That’s Hillary Clinton and family.

Hillary had hardly got her feet out the State Department door before she set up ZFS Holdings LLC in Delaware on February 8, 2013.

“ZFS was set up when Secretary Clinton left the State Department as an entity to manage her book and speaking income,” her campaign spokesperson told The Guardian. “No federal, state, or local taxes were saved by the Clintons as a result of this structure.”

Clinton says that this payment to her personal account isn’t “personal use” at all – actually, it’s rent.

Hillary said her presidential campaign building is now her personal office building and the new digs for Onward Together – so her campaign has to pay her rent for using her space!

Voila! Now, the remaining money in her campaign fund can be siphoned off from donors for the Clinton family’s personal use – and it’s all “legal.”

The Clintons have made $240 million since they left the White House – but less than $1 million of unused campaign funds is just too sweet a prize for them to ignore.

Nobody should be surprised. This is the same woman who is accused of taking $190,000 worth of furniture out of the White House in 2001 – and then stealing lamps and other furniture from the State Department a few years later.

Hillary looks at money the way Bill looks at every woman except her.

Better yet – Donald Trump should make sure that Hillary Clinton is moved to a jail cell.