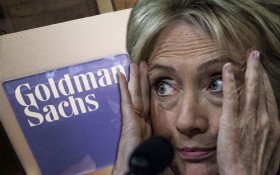 Now, it’s being reported that a bombshell is set to drop on the Clinton campaign. At least one print reporter is preparing to release the secret transcripts from Clinton’s paid speeches in front of Goldman Sachs millionaires and ‘good old boys’ that could shake up the 2016 Democratic presidential campaign.

According to a recent poll conducted by The Associated Press-NORC Center for Public Affairs Research, there is wide support within the Democratic party for Sanders’ fiery calls to increase regulations on Wall Street banks and address wide gaps between the nation’s wealthy and poor.

Half of Democrats in the recent poll say government regulation of financial institutions and markets put in place after the 2008 financial crisis didn’t go far enough, and more than two-thirds of Democrats call regulating financial markets a very important issue.

Which means the release of transcripts that may imply a cozy relationship between Clinton and Wall Street couldn’t come at a worse time for the Clinton campaign.

According to John Heilemann on a recent appearance on MSNBC’s “Morning Joe”, reporters have been frustrated recently with the lack of transcripts because, “What’s happening is you’re getting these people who have heard the speeches saying, ‘Oh, she sounded like a managing director of Goldman Sachs. She sounded like part of our club.'”

Co-host Mika Brzenzinski injects, “I know a print reporter who has actual transcripts, and they’re working on this,” before being quickly cut off by host Joe Scarborough.

Clinton has tried to portray herself as a champion of the middle class. But in an increasingly tight race, the Clinton campaign can ill-afford to turn off voters who are concerned that she sold her soul to Wall Street.

You can see the exchange here: