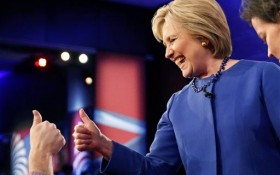 An interview by one of former Secretary of State Hillary Clinton’s devoted followers, Alaskan super delegate Kim Metcalfe, included admissions so shocking The Huffington Post said they “may make you question our democracy.”

Metcalfe reportedly said that nothing would make her change her primary vote for Clinton — even after Vermont Sen. Bernie Sanders won a staggering 81.6 percent of her state’s popular vote.

The interview, conducted by a young Alaskan voter named Levi Younger with Metcalfe on Facebook, asks her why she’s so certain she’ll support Clinton at the 2016 Democratic National Convention.

“Because I believe Hillary Clinton would be a better president,” Metcalfe says, so that’s who she is casting her primary ballot for — no matter what voters in her area say.

Screenshots of the conversation were transcribed by The Huffington Post as follows:

Younger (Sanders supporter): “While I understand your personal preferences would naturally come first (you are human after all) and conversations with Bernie supporters (not the man himself) would possibly leave a bad taste in your mouth, I believe that the people’s vote should probably have heavier precedent. Unless you were implying that it’s we are in charge of who you vote for, but rather something/someone else. Sanders will only be our nominee if those we’ve chosen to represent us do exactly that.”

Metcalfe (superdelegate): “Again, negative conversations about our candidates do nothing to further Sanders’s cause.”

Younger (Sanders supporter): “I’m not sure how negative it is to question your voting discretion in spite of overwhelming support. If critiquing Hillary or your apprehension to accurately vote for those you represent is negative, then I’m not sure you’re the one I’d like representing me.”

Metcalfe (superdelegate): “Because I believe Hillary Clinton would be a better president. End of conversation.”

Younger (Sanders supporter): “And that’s why people get angry. Bernie supporters can be quite vapid. But voting in opposition to what we voted for is only supporting the idea that Hillary and her supporting super delegates are in the pockets of others… Bernie won in Alaska. End of story. Your personal preferences for president are represented in your vote as a citizen. Not as a representative of your state.”

Metcalfe (superdelegate): “I’m in the pocket of no one. I have no financial connections to Hillary Clinton or any other Democrat. I am a retired union representative. I put in my time in the trenches for 40 years, and I really object to someone like you who has probably done nothing except caucus telling me what to do. I am voting for the best interests of my country. And that would be Hillary Clinton.”

Younger (Sanders supporter): “You’re not making a concerted effort to vote for the public. I am the public. Everyone who ‘did nothing but caucus’ did exactly like we should. We voted. You, ma’m[sic] are the one who is missing the point. You said it yourself, you’re voting for interests. But they’re not mine not the rest of the, what 75% of the state who opposed the Establishment (40 year Democratic veterans content with the status quo) and their choice for us.

Metcalfe (superdelegate): “You know it all.”

Younger (Sanders supporter): “Thank you for your time Kim. You’re stealing this for Hillary. And you’re rubbing it in all our faces. If you find these comments ‘negative’ it’s because what you are doing is wrong. As a citizen you get to vote for your choice. As a rep, you vote for us. In the end, we’ll hold you accountable.”

Metcalfe (superdelegate): “Sure. You’ll be involved after the election?”

Younger (Sanders supporter): “You better believe it now. Having someone tell you your vote doesn’t matter is enough to insight[sic] a riot.”

The conversation first appeared on US Uncut in the following screenshots — 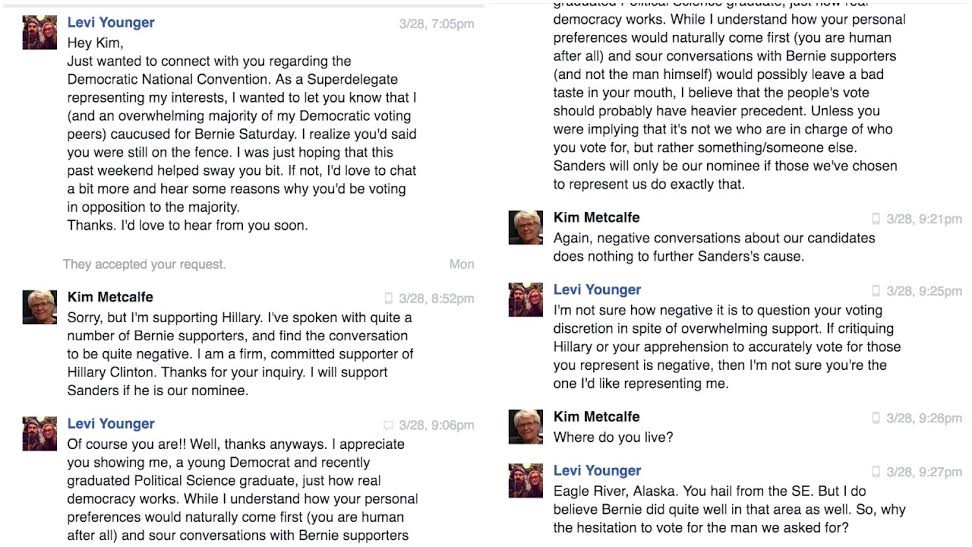 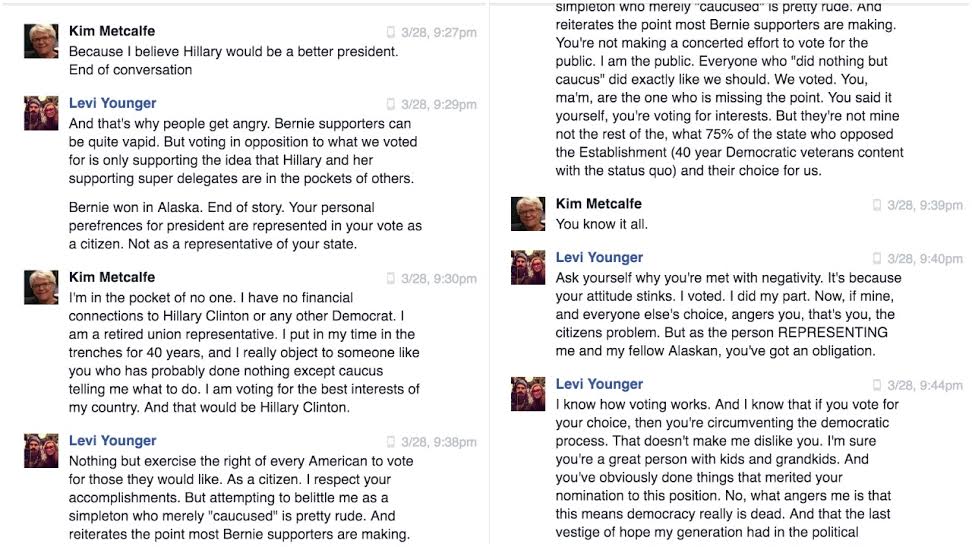 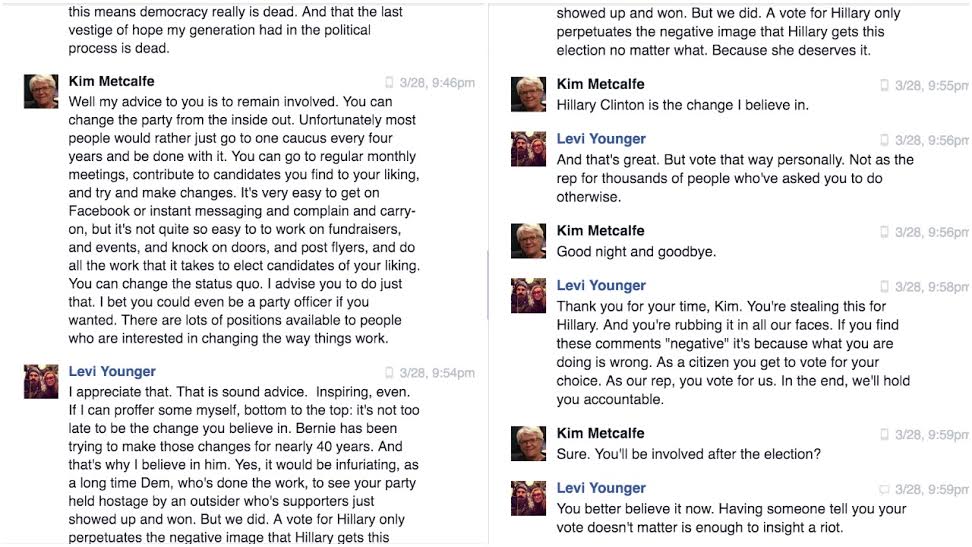 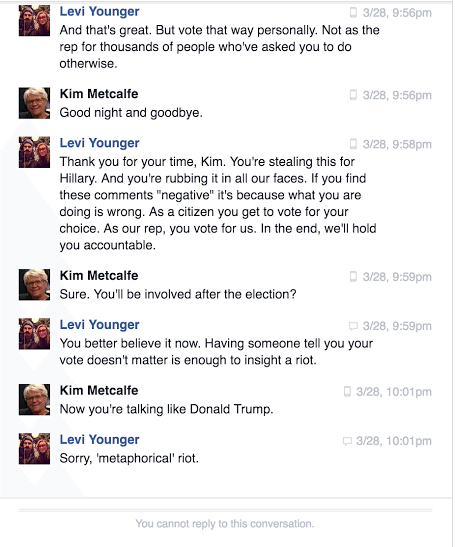