Hillary SPITS IN THE FACE of male Democrats (meltdown!) - The Horn News 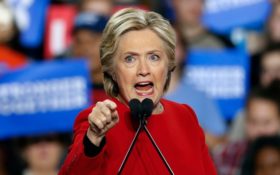 Former Secretary of State Hillary Clinton has refused to stop talking about her 2016 presidential election loss — and labeled Democrats that asked her to be quiet as “sexist.”

In the delicate world of establishment politics, insulting one’s own party (using the liberal identity politics, no less) is as insulting as a slap to the face.

That didn’t stop Hillary. In her controversial speech Friday at Rutgers University, Hillary implied that anyone who told her to “get off the public stage and shut up” was a misogynist pig, and cited former Secretary of State John Kerry and former Vice President Al Gore as examples of unfair treatment.

“They never said that to any man who was not elected!” Hillary exclaimed during the paid speech. The Horn News reported last week that she was paid $7,000 less for her appearance than a former reality TV show star.

“I was really struck by how people said [shut up] to me — you know, mostly people in the press, for whatever reason. Mostly, ‘Go away, go away,'” Hillary complained, according to MSNBC. “And I had one of the young people who works for me go back and do a bit of research. They never said that to any man who was not elected! I was kind of struck by that.”

Hillary “still has not admitted flaws in her own campaign, like a complete unwillingness to address an economic downturn in Rust Belt states — a strategy that meant she failed to visit and initiate contact with voters in key swing states,” The Daily Wire reported. “Instead, she’s spent the last nearly 18 months denigrating those who failed to find the ‘enlightenment’ required to cast their ballot in her favor.”

Hillary also promised she was going to keep complaining about how poorly she’s been treated — and that she is not going to go away any time soon.

“I’m really committed to speaking out and doing what I can to have a voice in the debate about where our country is going,” Hillary said.

Do the world a favor, Hillary.

We’ll even buy the bottles of chardonnay you need to keep busy.

Do you want Hillary to finally SHUT UP?