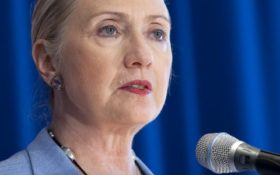 While in power, the Clintons fetched hundreds of thousands of dollars from corporations and foreign powers for a speech. Between 2001 and 2016, the former first family was paid a jaw dropping $153 million by Wall Street.

Now that they’re out of the White House, the cash cow seems to have dried up. Hillary was reportedly being paid only $25,000 for an appearance at Rutgers University this week.

While that’d be a huge payday for most Americans, that represents just 12.5 percent what the twice-failed presidential candidate commanded for speeches a few years ago when she was famously paid $200,000 by Goldman Sachs.

For comparison, consider that reality TV personality Nicole Elizabeth LaValle — aka “Snooki” from the MTV show Jersey Shore — was paid $32,000 to speak at that same college, where she instructed students to “study hard, but party harder.”

Snooki, it should be noted, is considered so unlikable that fashion companies reportedly send her their competitors products for free in hopes she’d hurt their brand.

But even Snooki commands more respect than Hillary these days.

How the mighty have fallen.

Would you pay to see Hillary Clinton speak?