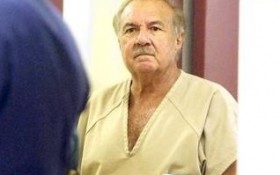 A former union chief and backer of Democratic presidential candidate Hillary Clinton may be spending the rest of his life behind bars.

The trial of former Broward Teachers Union President Patrick Santeramo began in a Florida courtroom yesterday, and promises to be a major headache for the Clinton campaign.

Santeramo, 68, is being tried for racketeering, money laundering and theft for his actions as head of the 13,000-member BTU, and is also facing federal fraud charges. He faces up to 30 years in prison.

The long-time union boss has been accused of raking in $165,000 in a kickback scheme with a contractor and $35,000 in funds meant for professional development for teachers.

According to prosecutors, Santeramo orchestrated a scheme to get BTU employees and members to make significant contributions to Clinton’s 2008 presidential bid.

Then, the union allegedly illegally provided reimbursement for the contributions and hid the reimbursements in its accounting records. This allegedly allowed Santeramo to funnel union funds and member dues directly into Clinton’s campaign coffers.

Broward County is the second-largest county in Florida, and Santeramo was a major Clinton supporter in the state. He called her at the time a “strong advocate for public school education professionals and a leader in fighting for education funding.”

Santeramo has also been accused of using a similar reimbursement scheme to get employees and members to make contributions to a political action fund. According to the indictment, this money was sent to the American Federation of Teachers, BTU’s national parent organization and a major Clinton supporter.