Hillary – I’m coming for your guns - The Horn News 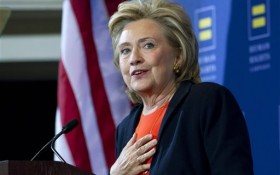 While the nation continues to mourn the victims of last week’s mass shooting at Umpqua Community College in Oregon, Democratic front-runner Hillary Clinton is already angling to politicize the tragedy.

Immediately following the shooting in Oregon, Clinton revealed her plans to drastically reduce gun sales in the United States, as well as her strategy for seriously limiting what current owners are allowed to do with their guns.

She vowed to use executive power to expand background checks for sellers at gun shows and possibly prevent Americans from re-selling their own guns.

Clinton also said she will back congressional efforts to stop retailers from selling guns to people with incomplete background checks and would support legislation banning domestic abusers from purchasing guns.

During a day-long campaign swing through New Hampshire this weekend, Clinton’s campaign also said she’s also looking to repeal legislation that shields gun manufacturers, distributors and dealers from most liability suits, even in the case of mass shootings like the one that killed nine students and teachers at Umpqua Community College on Thursday.

The proposal marks an effort by Clinton to stake out liberal ground against her closest rival, Vermont Sen. Bernie Sanders.

After the Sandy Hook shooting in 2013, Sanders backed all the Democratic gun bills brought up in Congress. But in 1993, he voted against the landmark Brady handgun bill, which imposed a five-day waiting period for gun purchasers, and he backed the 2005 legislation granting legal immunity to many in the gun industry.

Not to be outdone, Clinton promised Monday, “I am going to get those guns out of people’s hands.”