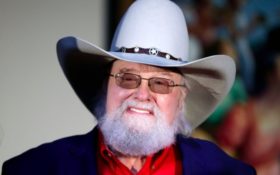 He’s been bringing his brand of truth-telling to the world of politics, calling out hypocrites and reminding the nation of just what’s on the line.

And right now, the “Devil Went Down To Georgia” singer is reminding Americans of the evil that almost took over Washington in 2017 — better known as Former Secretary of State Hillary Clinton.

“America walked on thin ice and almost fell through,” Daniels wrote for CNS News. “Only the grace of God kept us from it.”

He’s referring of course to Hillary coming perilously close to the presidency.

With her and her cronies running the show, everything from the IRS scandal, in which the government targeted conservative groups, to Benghazi would’ve been swept under the rug.

“None of this was ever supposed to come to light,” he wrote. “They were so arrogant and confident that Hillary Clinton was going to be president and all the garbage would be buried, the guilty parties would still be in power and that the socialist-globalist agenda of Barack Obama would go forth, that they didn’t even take the time to properly cover their footprints.”

Thanks to Donald Trump’s surprise victory, however, it’s all coming to light.

But while Daniels might be celebrating a musical career that goes dates back some 60 years, he’s not some desperate nostalgia act.

“Does anybody actually think that Schumer, Pelosi and the rest of the Democrats, and a couple of RINOs, actually care about the ‘Dreamers’?” Daniels asked before hammering them with a question that practically answers itself: “Well, they have claimed that they care about the minorities for fifty years, but what have they done for them?”

Indeed, Trump has done more for black Americans in one year than Democrats have in decades, bringing unemployment in the African American community down to its lowest level in two generations.

Daniels knows what their phony concern over immigration is really all about: creating a new base of voters loyal only to them.

“All the dreamers or the minorities mean to these burnt charlatans are votes, pure and simple,” he wrote. “Just give us your vote, and go back to the ghetto and wait for another fifty years.”

There aren’t too many celebrities as down to earth as Daniels, who routinely tweets out reminders and reality checks, with Hillary Clinton often in his cross hairs.

“Benghazi ain’t going away!” is what he writes every day, just to let the families of the murdered heroes know that Americans are still seeking justice.

“22 VETERANS COMMIT SUICIDE EVERY DAY!!” he also tweets regularly, a stark reminder that those who have protected this nation aren’t getting the protections they need at home.

Just last week, with the Democrats threatening another shutdown over protection for illegal immigrants, Daniels wrote —

I wish the democrats were as anxious to deal with child sex slavery, the children who go to bed hungry every night and the ones who are afraid to walk the innercity streets for fear of being shot as they are taking care of the dreamers.
Guess we know where their loyalties lie

“I wish the democrats were as anxious to deal with child sex slavery, the children who go to bed hungry every night and the ones who are afraid to walk the innercity streets for fear of being shot as they are taking care of the dreamers. Guess we know where their loyalties lie.”

Daniels is also looking forward to a big day for U.S. sports.

Nope. Not the Super Bowl!

Forget the politically charged NFL, Daniels – and millions of other Americans – are now ready to focus on a sport where it’s still OK to love the nation.

“Two weeks till Daytona,” he wrote over the weekend. “And then it all begins. Bring on the NASCAR where they have a prayer before every race and nobody kneels during the anthem God Bless America.”