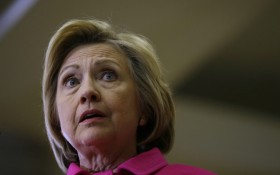 Democratic presidential candidate Hillary Clinton has said that abortions should be “safe, legal, and rare.”

But according to shocking new allegations from an alleged ex-mistress of former President Bill Clinton, she wasn’t always too insistent on the rare part.

In a wide-ranging interview with The American Mirror, Sally Miller, who reportedly had an extended affair with Bill Clinton in the 1980s, claimed Clinton admitted his wife had “several abortions” before finally agreeing to have a child.

And even that only happened because of the advice of political consultants, Miller said.

“Bill convinced her that if they were ever going to move up in politics that they had to have a child because that is what the political analysts had said,” Miller said in the interview, which caused a media firestorm and was being rapidly picked up by news outlets around the world.

Miller claimed she was a close confidant of Bill Clinton during their affair, and that he regularly and willingly divulged private details about his relationship with his wife.

Reportedly, Bill Clinton and his consultants believed that having a child would make both he and his wife appear more likable.

Ironically, it may be the Clintons themselves who made candidates’ and their spouses’ histories of abortion fair game in campaigns. Former Pennsylvania Senator Rick Santorum has reportedly long believed that Bill Clinton was responsible for a rumor that his wife had an abortion.

The abortion allegations against the Clintons will be difficult to substantiate — and both Clintons are unlikely to admit to them. But the widespread media coverage is creating yet another media headache for Hillary Clinton, and is another reminder of her husband’s alleged repeated infidelity.

These accusations against Hillary Clinton aren’t a surprise to at least one pro-life group.

According to LifeNews, “Hillary’s dedication to abortion is unquestioned and abortion activists have often turned to extreme abortion advocacy in part because of their desire to defend previous abortions.”

Miller’s interview can be seen in its entirety here.