Hillary FREAKS OUT over Sean Spicer (yikes!) - The Horn News 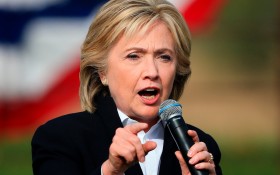 Following her devastating defeat in November, failed Democratic presidential candidate Hillary Clinton has largely remained hidden from public view. On Tuesday, however, she reemerged from hiding to give her first major speech of 2017 — and proceeded to freak out over White House Press Secretary Sean Spicer.

Critics say the freak out is from the exact identity politics playbook that caused her stunning 2016 election loss to President Donald Trump.

According to Newsmax, Hillary’s “angry speech” came during the closing remarks at the Professional Business Women of California conference in San Francisco.

“Just look at all that’s happened in the last few days to women who were simply doing their jobs,” Hillary said, referring to Spicer’s recent exchange with veteran White House reporter April Ryan, when Spicer asked her to “stop shaking your head” as he answered a question.

In other words, according to Hillary, asking a journalist to show a little respect towards the White House is unacceptable!?

Hillary claimed, in fact, that this was a prime example of the “indignities” forced upon liberal women by the Trump administration.

“April Ryan, a respected journalist with unrivaled integrity, was doing her job just this afternoon in the White House press room when she was patronized and cut off trying to ask a question!” Hillary yelled to the crowd.

Spicer had accused Ryan, a known liberal that works for American Urban Radio Networks, of pushing an agenda.

“April, hold on, it seems like you’re hell-bent on trying to make sure that whatever image you want to tell about the White House stays,” the press secretary said.

Not to Hillary, who said that liberal women shouldn’t have to show people respect.

“Why should we have to!?” Hillary asked. Gee, maybe because civility is a two-way street?

To his credit, Spicer addressed the controversy — and supporters said his remarks totally shut down Hillary.

Spicer said Ryan was a “tough reporter” that he treats the same as anyone else.

“To suggest that somehow because of her gender or race she’d be treated differently, I think, is frankly demeaning to her,” Spicer said during Hugh Hewitt’s radio show. “She’s a tough woman that fights every day to get out there for her publication and her audience to get the questions that she wants answered, and I respect that.”