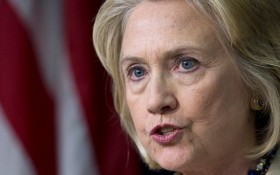 Former Secretary of State Hillary Clinton has been accused of pulling off an “election fraud masterpiece” in Arizona during Tuesday’s presidential primary voting, with one reporter saying that Clinton “found an ingenious way to guarantee victory in Arizona.”

And they’re not the only ones outraged by what happened.

Many Arizona residents waited hours to vote, some Sanders supporters had their political affiliations changed from Democrat to independent so they couldn’t cast their ballots, and several polling places were shuttered this year. And that has all led to accusations of voter suppression and election fraud meant to benefit Clinton.

The outrage has grown so loud, the mayor of Phoenix has written an official letter to the Department of Justice asking it to investigate.

Election fraud is a felony offense, and with high profile political pressure the matter will be taken very seriously by the DOJ.

For their part, the Clinton campaign and most in the Democratic party are instead blaming Republicans for the fiasco in Arizona.

Here’s what is certain — Maricopa County’s top elections official, Recorder Helen Purcell, cut the number of polling places in the presidential primary from 200 in 2012 to just 60 on Tuesday, although those were larger voting centers where any registered voter could cast a ballot. During the last high-turnout presidential primary, in 2008, there were 400 polling places in the county of 4 million residents.

Critics believe the changes were merely ploys to stifle Democratic turnout, which Sanders supporters say would have benefited his campaign.

Purcell took responsibility for Tuesday’s foul-up and acknowledged she made a mistake. She said she relied on voter turnout expectations, the fact independents could not vote in the primary, and that most Arizonans are mailed early ballots. But she said the problems at the polls were in no way intended to suppress participation.

“When you see people who are still willing to cast that vote and wait in line until well after the polls close, I don’t think that’s voter suppression,” Purcell said.

“It is totally unacceptable for people to have to wait in lines of that length to vote,” said Republican Gov. Doug Ducey. “This should be a basic function of government that we should be able to execute.”

Teresa Jimenez was among those who waited in line for nearly two hours Tuesday, only to have election officials close the site around 7 p.m. She went home without voting.

She said she and other voters were excited to cast ballots, but their enthusiasm vanished when the site shut down.

“How are we supposed to hear our voices?” Jimenez said.