Hillary Clinton was SCREAMING MAD when she heard... - The Horn News 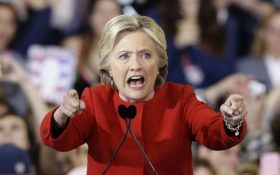 Think Hillary Clinton is out of the 2020 race?

Think again. Her and her loyal cronies remain deeply entrenched inside the inner workings of the Democratic Party — and they’re furious about how 2020 is working out.

Hillary’s most trusted “attack dog” David Brock has said Sanders will win the 2020 nomination — and that makes the establishment very, very mad.

He’s part of a growing movement of pro-Clinton insiders who have all settled on the same name.

They’re running scared that the 77-year-old Democratic Socialist will ruin their chances to push President Donald Trump out of the White House.

One of the people who has been trying to get the word out is David Brock, a longtime Clinton crony who started the Media Matters smear machine.

“There’s a growing realization that Sanders could end up winning this thing,” Brock told the New York Times.

Brock — a favorite of the party’s wealthiest backers — said last month that “among a lot of the major donors in the party, there’s concern that he could emerge.”

Concern is putting it mildly. E-mails emerged that the DNC stacked the 2016 primaries against him, and Donna Brazile later admitted as much.

But now, he’s back, and Hillary’s loyalists aren’t happy.

“People underestimate the possibility of him becoming the nominee at their own peril,” said Howard Wolfson.

That name may not mean a lot to the average person, but it’s huge inside the party. Wolfson is a professional pollster who spent months probing the Democrats’ base.

Before that, he was the communications director to Hillary’s 2008 presidential campaign, and he also advised New York’s two U.S. Senators: Kirsten Gillibrand and Senate Minority Leader Chuck Schumer.

If anybody has his finger on the pulse of the Democratic Party, it’s Wolfson.

But even Republicans are hearing the same rumors from their sources.

“I hear that people on Bernie’s staff are now saying that Bernie has accepted that he’s gonna be president and he’s running around actually thinking of himself in the Oval Office,” Rush Limbaugh told his listeners on Tuesday.

Even people without access to political intelligence can see that Bernie is the odds-on favorite right now. A new national poll shows Bernie dominating the 2020 field with 29 percent.

The only person within whistling distance is Joe Biden.

No one else even breaks double digits—and that has Democrats like Brock and his Clinton-loyal ilk breaking a sweat.

“The Bernie question comes up in every fund-raising meeting I do,” Brock admitted.

Some of them have even sketched out exactly how the primaries and conventions will play out.

So many candidates are running in 2020 that the Democratic National Convention will end up deadlocked—or that’s what Leah Daughtry says, and she ought to know. She ran the DNC in 2008 and 2016.

The Democrats front-loaded the primaries so Hillary could steam through them in 2016—and it’s coming back to bite them.

After the first four primaries, they dive straight into Super Tuesday, where 10 states vote…and 40% of their delegates get selected.

With maybe a few dozen candidates running, all winning single digits, the frontrunner has a huge advantage.

Unless the herd gets cleared to one obvious rival, Sanders can win most of the delegates—but maybe not a majority, even by the date of the convention.

For the first time in years, there won’t be an obvious nominee going into the DNC. And guess who’s set to be the last man standing?

The same Bernie Sanders who believes the Boston Marathon bomber should be able to vote from his jail cell?

The same Bernie Sanders whose Medicare for All plan would add $32 trillion to the national deficit?

That’s the one. All the other candidates are trying to steal his socialist ideas themselves.

The same Bernie Sanders who isn’t even a Democrat—he’s a registered independent?

Yes! The Democratic Party’s voters have gone so far Left that they don’t even want to nominate one of their own.

David Brock and his buddies in the Clinton inner circle know it. That’s why he’s promised to start a well-funded anti-Sanders campaign during the Democratic primaries, “sooner rather than later.”

They hope that Joe Biden will be the one candidate with enough funding and name recognition to stop him dead in his tracks.

But Bernie Sanders is a socialist, he’s angry, and he’s out-of-touch with reality… so he connects perfectly with the Democratic Party base.

Whether Hillary wants to hear it or not, everybody agrees: Right now, it’s his nomination to lose.