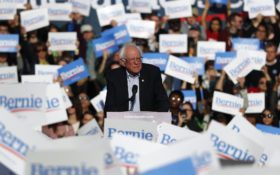 Sen. Bernie Sanders, I-V.T., took the stage at CNN’s town hall ready as the centerpiece of the 2020 Democratic presidential primary.

He may have said the one thing that may leave his campaign in pieces.

Bernie thinks everyone should get a vote in America’s presidential election — even convicted Islamic terrorists serving time behind bars.

When a guest in the audience asked about felon voting rights, Sanders said he wanted criminals to have a say. He even said he’d give convicted Boston marathon bomber Dzohkar Tsarnaev a vote.

Bernie said that convicted rapists, murderers, and radical Islamic terrorists have the right to vote.

“If somebody commits a serious crime, sexual assault, murder, they’re going to be punished,” Sanders said. “They may be in jail for 10 years, 20 years, 50 years, their whole lives. That’s what happens when you commit a serious crime.”

“But I think the right to vote is inherent to our democracy,” he said. “Yes, even for terrible people, because once you start chipping away … you’re running down a slippery slope.”

“I do believe that even if they are in jail, they’re paying their price to society, but that should not take away their inherent American right to participate in our democracy,” Sander continued.

“Once you start chipping away at that … that’s what our Republican governors all over this country are doing,” Sanders said.

“They come up with all kinds of excuses why people of color, young people, poor people can’t vote. And I will do everything I can to resist that,” he added.

Of course, it was this White House administration, along with Senate Republicans, who fronted and passed the First Step Act bill which is now set to overhaul the criminal justice system.

Call it crazy, but maybe the GOP wanted to fix the clearly broken system — without giving radical Islamic terrorists a vote.

Of course, a slew of Democrats voted against it because the suggested changes to the justice system were coming from President Donald Trump’s White House.

Sanders’ view on inmates’ voting rights is evidence that almost any hot take can charm liberal voters into a voodoo-like spell – as long as you blame Republicans.