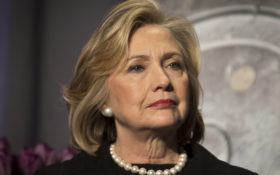 Starr says Hillary lied to him hundreds of times about former White House adviser Vince Foster’s suicide — and he considered charging her with perjury.

Starr wrote that he strongly considered charging Hillary with perjury over her “preposterous” deposition when questioned over Foster’s death.

“I was upset over Mrs. Clinton’s performance, and was even considering bringing the matter before the Washington grand jury for possible indictment on perjury,” Starr wrote.

According to Starr’s account, Hillary was clearly lying under oath. Because the burden of proof was too high, though, Starr ultimately decided not to pursue charges.

“In the space of three hours, she claimed, by our count, over a hundred times that she ‘did not recall’ or ‘did not remember,’” Starr wrote. “This suggested outright mendacity. To be sure, human memory is notoriously fallible, but her strained performance struck us as preposterous.”

“Proving that someone knowingly lied when they said ‘I don’t recall’ or ‘I don’t remember’ is extremely difficult, especially if that person is the First Lady,” Starr told Fox News’ Tucker Carlson on Monday. “What was clear was that Mrs. Clinton couldn’t be bothered to make it appear as if she were telling the truth.”

However, the memories of Foster’s death continue to disturb Starr, he wrote in his explosive new book.

“In many ways, I was a lot like him: serious about the law, conscientious, and loyal to a fault. Foster had been needled by the media, which I knew all too well could be brutal, especially for someone not used to the public eye,” Starr wrote.

“But that’s why I was haunted. Why did this very successful, very bright lawyer take his own life within six months of the administration taking power? And that … haunts me to this day,” he said.