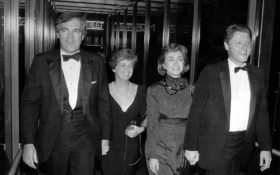 Of all the scandals that plague Hillary Clinton, none is as damning as her role in the death of Vince Foster. He and Hillary had been close friends – and rumors say, possibly much more – before he allegedly committed suicide in 1993.

Now, compromising FBI records about Clinton’s role in Foster’s death have disappeared from the National Archives, news outlets have deleted their coverage of the story, and the so-called “Clinton body count” keeps piling up.

The newest accusation of missing documents doesn’t come from Alex Jones or the “vast right-wing conspiracy,” but from Ronald Kessler, a former investigative reporter with the Wall Street Journal and Washington Post who has written 20 books.

Kessler is respected and credible — and he says he has proof that Hillary has something to hide in the death of her longtime friend.

When he returned, archivist James Mathis brought him the same box, with the same material – except all the condemning FBI records about Hillary Clinton had been removed.

“The reports on Hillary Clinton’s role in his death were absent,” Kessler wrote in The Daily Mail.

Foster and Clinton had a relationship that went back to the 1970s, when they worked together at the Rose Law Firm. They had lunch on an almost daily basis at a posh Little Rock eatery. Soon, they had dinner regularly, too.

People who worked with them said they had an affair that lasted all the way until after Bill Clinton was elected president, according to Bill & Hillary: So This Is That Thing Called Love, written by Darwin Porter and Danforth Prince.

What no one disputes is that Hillary Clinton publicly berated her longtime friend in front of his colleagues shortly before his death. FBI agent Coy Copeland told Kessler that Hillary blamed Foster for everything that had gone wrong in Bill Clinton’s first six months as president – the scandalous appointments, Hillary’s health care fiasco, everything.

According to Copeland, Hillary told Foster “he didn’t get the picture, and he would always be a little hick town lawyer who was obviously not ready for the big time.”

Copeland and another FBI agent, Jim Clemente, told Kessler that Hillary’s tirade was “the final straw” for Foster.

But all the proof of this has conveniently vanished from the National Archives, Kessler wrote. Federal employees won’t admit that the documents had been destroyed, only that they could be filed away somewhere else in one of the other 3,000 boxes and 7.5 million pieces of paper that Ken Starr’s investigation produced.

The prestigious International Business Times ran an article on August 23 by Cortney Drakeford titled, “What Really Happened To Vince Foster? FBI Files Linking Hillary Clinton To Suicide Of White House Employee Vanish.” But someone quickly pulled the piece from the IBT’s website. Compare the cached version here versus the missing article here.

In true 1984 fashion, the article and the documents are gone — poof! — right down the memory hole.

The National Archives have revealed a lot of sizzling evidence that entangles Hillary and the Clinton machine deeper in the alleged suicide.

He supposedly committed suicide, but investigators also found evidence of a possible second small caliber wound in his neck, according to a 31-page memo written by Ken Starr’s lead prosecutor, Miguel Rodriguez, researchers discovered in the National Archives.

Whatever happened to the FBI files, they’re not the only documents that have gone missing under mysterious circumstances.

The newest document scandal is even more suspicious, since it comes after numerous people who have exposed other Hillary Clinton scandals have died by unusual means:

It’s not just documents that seemingly disappear if the Clinton family is threatened.