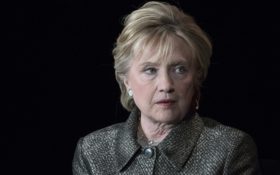 Former Secretary of State Hillary Clinton has held a number of odd jobs since losing the 2016 presidential election.

Hillary has developed a television series for Hulu. She’s been named chancellor of a university in Northern Ireland. She’s published a mystery novel (It is suspected that she outsourced much of the writing). She even worked as an Electoral College voter in the 2020 election.

Now she’s heading to the stage back in The Natural State.

Hillary will play the offstage role of the Giant in a production of Stephen Sondheim’s “Into The Woods” in her onetime home state of Arkansas, the Arkansas Repertory Theatre announced on Monday.

“Real news, and I’m really excited! Check out the production if you’re in Little Rock,” Clinton tweeted and her spokesperson confirmed to The Associated Press.

The “Into The Woods” Giant is the vengeful widow of the giant who Jack killed after climbing the beanstalk. The Giant does not appear on stage, and the voice part is usually prerecorded.

Clinton has previously had cameo roles in the television shows “Madam Secretary” and “Murphy Brown.”