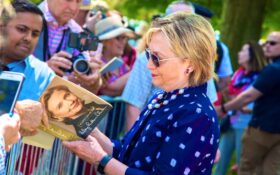 Hillary Clinton’s public profile has ebbed and flowed since her embarrassing loss in 2016. She laid low during President Joe Biden’s campaign in last year’s general election, but now she’s entered the spotlight again — not for her silence on Afghanistan, but for her new novel.

Clinton is calling the novel State of Terror. She said she co-wrote the novel with Louise Penny, a popular author of mystery novels. Still, it remains unclear how much work was outsourced to Penny.

The novel follows a fictional character named Ellen Adams as she becomes the state secretary under a former political rival.

Eventually, the fictional Secretary Adams becomes skeptical of the previous administration’s Afghanistan policies, including its deal with the Taliban. She worries that the country may return to Taliban rule.

Adams also meets a joint chief of staff who challenges the president.

Oddly enough, Clinton wrote the novel before Milley’s testimony before Congress or Biden’s clumsy exit from Afghanistan. She gave Axios a synopsis of her book in February.

On Twitter, she called the book her “first foray into fiction.” That’s technically true, unless you count all her political lies.

Clinton modeled Ellen Adams after the late Under Secretary of State Ellen Tauscher, she told The Associated Press in an interview published on Monday.

However, the book’s premise still bears obvious, distracting similarities to Clinton’s own career. The book may as well be a work of autobiographical fiction, rather than a political thriller or mystery novel.

True to form, Clinton is arriving at the autofiction trend just a few years too late.

Still, Clinton said — in her usual, roundabout way —  that the novel does not reflect her time as state secretary. “That wasn’t my experience, but the fact that I was a surprise choice — I was well aware — led people to speculate about that being the experience I would have,” Clinton told the AP.

The book goes on for almost 512 pages, according to Goodreads. After all, publishers make more money on longer books.

Will you read Hillary Clinton's novel?