Hillary Clinton gets VERY BAD news about June (lock her up!) - The Horn News 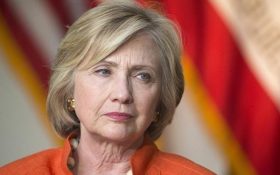 The Department of Justice has reopened the investigation into Hillary’s illegal email server. It’s seriously bad news for the twice-failed presidential candidate, because it could lead to her arrest around June of this year.

In other words, Hillary may have just five more months of freedom left.

Earlier this week, Trump responded to public pressure to reopen the investigation with the following statement —

Many people in our Country are asking what the “Justice” Department is going to do about the fact that totally Crooked Hillary, AFTER receiving a subpoena from the United States Congress, deleted and “acid washed” 33,000 Emails? No justice!

The Justice Department responded Thursday by formally announcing the case will be looked into again using this new information — now free from what critics have called former FBI Director James Comey’s meddling.

“Last week, conservative group Judicial Watch won a lawsuit against the State Department and released emails showing that classified information was on the computer of Abedin’s then-husband Anthony Weiner,” The Washington Examiner reported.

“The FBI previously investigated and declined to criminally prosecute Clinton for her use of the email server. But Trump and his supporters used the email debacle as a rallying cry throughout the campaign.”

The new Department of Justice investigation into the email scandal is expected to start immediately, and should wrap up by the spring.

That means Hillary could finally be in handcuffs by June.

What a nice summer treat.