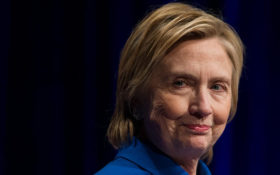 Now, the truth is finally coming out.

It was MATT LAUER who told Hillary Clinton not to campaign in Wisconsin.

It was MATT LAUER who advised her to hide tens of thousands of government emails in a private home server.

It was MATT LAUER who ensured Clinton kept ties to pervert Anthony Weiner.

Of course, the disgraced former NBC star did no such thing, but you wouldn’t know it listening to the Clinton Camp!

Now, they’re pointing it at Lauer.

“Every day I believe more in karma,” Clinton said when asked about his firing, noting that he and other “men who shaped the narrative” during the election were all fired over similar allegations of misconduct.

The inference, of course, is yet another accusation that the sexism of Lauer and others cost her the election – and that it was sexist for him to ask her tough questions in an interview during the campaign last year.

Imagine how loud they’d be screaming if she had been treated even remotely like Trump, who faced a hostile media hurling loaded and unfair questions at him from the day he announced his candidacy.

But a couple of tough questions from Lauer – legitimate questions about her email scandal – had them steaming.

“Trump should have reported his performance as an in-kind contribution,” Clinton wrote about the interview in her book “What Happened.”

“I can’t say I didn’t fantasize about shaking some sense into Lauer while I was out there,” she added.

She also called the interview an “ambush” and a “waste of time.”

And of course, all of Clinton’s old lackeys came out of the woodwork to dance on Lauer’s grave.

“Matt Lauer was fired today,” former Clinton aide Peter Daou wrote on Facebook. “One by one, we’re finding out the true character of the male journalists who treated Hillary Clinton (and her voters) with seething disdain.”

“Another person whose interview with Trump was ridiculously soft and interview with Hillary was incredibly tough: Matt Lauer,” prominent Clinton supporter Neera Tanden wrote in Twitter.

Sentiments like those are more proof that they still don’t understand why Trump won in a populist wave that spoke to middle America’s values after 8 years of being shut out and flat-out ignored by the Washington establishment.

And that means despite the left’s big victory in Alabama, the Democrats could be about to repeat their mistakes all over again in next year’s critical midterm elections.