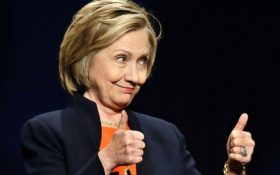 According to Beto’s campaign manager Chris Evans, Hillary has begun giving the campaign advice on how to win in a crowded Democratic primary.

“Beto is grateful for Secretary Clinton’s leadership and service to our country,” Evans said, according to The Daily Beast.

“He is glad they had the opportunity to talk about how we’re witnessing people in communities all across America step up like never before, unite together, and fight to overcome the greatest set of challenges this country has ever faced,” Evans said.

However, Beto’s campaign is making use of an arsenal of Hillary insiders. He recently hired a number of 2016 alums, including Jeff Berman, who served as a delegate strategist in her 2016 campaign, and Rob Flaherty, who worked for the Hillary campaign as deputy director for digital communications.

FLASHBACK: This FBI chart could send Hillary straight to jail