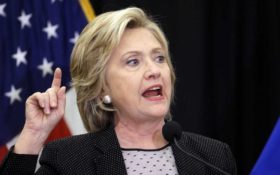 Criminals always leave evidence at the scene of the crime. It seems former Secretary of State Hillary Clinton is no different.

No matter how smart they are, no matter how thoroughly they scrub the site, some forensic evidence always comes back to bite them.

Now one piece of the Clinton investigation has resurfaced — and it could send Hillary to jail for a long time.

In fact, investigators may have just found the smoking gun that Clinton broke so many laws that the FBI compiled a secret list… and then tried to bury it!

During private testimony, an FBI official admitted that his investigators drew up a chart of  “available statutes for prosecuting the former Secretary of State.”

Hillary Clinton violated so many laws that federal agents needed a visual aid to represent them all.

Until now, the public believed that James Comey only considered prosecuting Clinton for “gross negligence” for sending classified information from her homebrew e-mail server while she was Secretary of State.

Comey decided to let Clinton off-the-hook before he even interviewed her, and announced the decision in July 2016.

He called her “extremely careless” — but Comey said she didn’t mean to violate the law, so he wouldn’t press charges.

Hillary’s team got to work smashing cell phones, using BleachBit to permanently erase tens of thousands of e-mails that were under subpoena.

She thought she’d wiped out every incriminating word or statement.

She was wrong. Dead wrong.

The chart was mentioned in an e-mail from an unnamed worker high in the FBI’s general counsel office.

The man who headed up the Clinton investigation on paper, Bill Priestap, confirmed that the chart existed under oath, behind closed doors at the House of Representatives.

What’s more shocking is the 6 words stamped on the chart: “DOJ not willing to charge this.”

Priestap, who decided to retire not long after the testimony, said: “I don’t know why they used that language.”

But Lisa Page — who, together with Peter Strzok, started up the phony Russian collusion investigation — testified that she knew exactly what the chart meant.

The chart proves that the fix was in: former President Barack Obama’s Justice Department, headed by former Attorney General Loretta Lynch and overseen by Obama, had already made up its mind they wouldn’t press charges… no matter what evidence was found.

Page testified that even if “in fact, all 17 of those witnesses admit, ‘We did it, it was on purpose, we totally wanted to mishandle classified information,’ gross negligence would still have been off the table because of the department’s assessment.”

The chart told the Feds to back off. That list of crimes didn’t include “gross negligence” at all.

Lisa Page testified that the Justice Department told them “gross negligence” had too much “vagueness” to prosecute anyone — at least, anyone named Clinton.

Someone inside the FBI was so outraged that he or she decided to draw up a “chart of the statutory violations considered during the investigation [of Hillary Clinton], and the reasons for the recommendation not to prosecute.”

The person sent that e-mail on July 8, 2016… to Peter Strzok, the man who was trying to spy on then-Republican presidential candidate Donald Trump’s campaign and spike the result in case Trump won.

Priestap’s testimony leaked out… but insiders suppressed the chart of Clinton crimes. So conservative watchdog group Judicial Watch has sued for its release.

The group has asked the federal government to reveal all the crimes and all the laws it could have prosecuted Hillary Clinton for breaking.

They haven’t had much luck so far. The DOJ already refused to turn the list over following a Freedom of Information Act request last December.

While Donald Trump has been the focus of an illegitimate witch hunt for two years, Hillary Clinton has been raking in the cash.

“The FBI should focus on this Clinton ‘matter’ now that it is unencumbered by the corrupt partisanship of Comey, McCabe, Strzok, Page, etc.,” he said.

Critics say Hillary has avoided punishment for her crimes for decades – from Whitewater to the Rose Law Firm, to filegate, to the Uranium One deal, to the Clinton Foundation’s decision to take bribes from overseas.

And who knows what other crimes might be on this chart?

President Donald Trump should make sure the whole list ends up on a federal indictment. Nobody should be above justice.

This chart just bubbled to the surface — and it could finally take Hillary down.