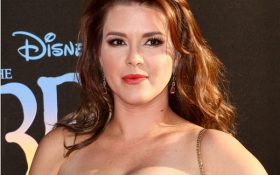 Just when you thought the campaign of Hillary Clinton couldn’t possibly get any more insane, she rolls out a new spokesperson so controversial that her presence is potential political suicide for the Democratic presidential candidate.

Following Monday’s debate, the Clinton campaign unleashed a new attack dog — one linked to an attempted murder and alleged murder threats against a judge in 1998.

Former Miss Universe Alicia Machado has given multiple interviews to news stations across the country this week, spreading her anti-Trump story through any mainstream media outlet that would give her the time of day.

The beauty queen claims that when she gained weight after being crowned Miss Universe for 1996, Donald Trump labeled her with a sexist nickname — “Miss Piggy” — that caused her shame and humiliation.

The only problem with Machado’s attempt to woo women voters away from Trump? Turns out, “Miss Piggy” has a history of rolling in the mud with would-be murderers.

Machado’s controversy began in 1998 for her alleged involvement in the shooting of Francisco Sbert Mousko, who suffered brain damage when two bullets punctured his skull outside a church where his dead wife was being eulogized that year.

And the family said Machado was the getaway driver of the car that her boyfriend sped away from the shooting in.

“Our accusations against Alicia Machado are based on coinciding testimony from witnesses, who place her in the vehicle in which Juan Rodriguez fled the scene,” said Omar Arenas Candelo, one of three attorneys who presented the allegations to a criminal court after the shooting.

It doesn’t end there. A Venezuela judge said later that year that Machado threatened to murder him after he indicted her boyfriend for the attempted murder.

Machado threatened “to ruin my career as a judge and … kill me,” Judge Maximiliano Fuenmayor said in an interview on the subject on Venezuelan television in 1998.

Now a U.S. citizen, Machado told reporters Tuesday in a conference call arranged by the Clinton campaign that her experience with Trump could “open eyes” in the presidential election.

“I’m no saint,” Machado told CNN’s Anderson Cooper, but “the past is the past”.