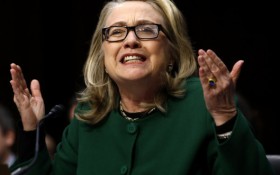 A recent verbal misstep has even the most hardcore supporters of former Secretary of State Hillary Clinton up in arms.

In an interview on NBC’s “Meet the Press” on Sunday, Clinton planted her foot firmly in her mouth — and defied left-wing talking points — when she said on abortion, “The unborn person doesn’t have constitutional rights,” and that her administration would “help a mother who is carrying a child and wants to make sure that child will be healthy, to have appropriate medical support.”

Abortion advocates were quick to lash out at Clinton for referring to developing babies as “unborn persons,” because it goes against years of carefully planned pro-abortion rhetoric.

The International Planned Parenthood Federation issues guidelines to abortion advocates, telling them not to use terms humanizing unborn babies by referring to them as persons, unborn children, or babies — but suggests “more accurate/appropriate” word usage like “fetus” and “embryo”.

One does not kill a child, but instead “ends a pregnancy.”

The guide tells supports, “‘Abort a child’ is medically inaccurate, as the fetus is not yet a child,” and also recommends, “‘Terminate’ a pregnancy is commonly used, however some people prefer to avoid this as terminate may have negative connotations (e.g., ‘terminator or assassinate’) for some people.”

A senior manager at Planned Parenthood Illinois Action, responded to Clinton with the following tweet:

The Weekly Standard said, “Oftentimes, when talking about a woman’s right to choose, pro-choicers will use terminology that suggests the unborn is not a person or human, but a ‘fetus.'”

The gaffe comes at a poor time for Clinton. She has faced increased criticism from Democrats in recent weeks for her missteps, and seems like it’s starting to wear on her campaign.

Recently, Clinton snapped at a Greenpeace protester complaining about fossil fuels. She linked Vermont Sen. Bernie Sanders and tea party Republicans. And she bristled with anger when nearly two dozen Sanders supporters marched out of an event near her home outside New York City, shouting “if she wins, we lose.”

After a year of campaigning, months of debates and 35 primary elections in the Democratic presidential race, Sanders is finally getting under Clinton’s skin.

Clinton has spent weeks largely ignoring Sanders and trying to focus on Republican front-runner Donald Trump. Now, after several primary losses and with a tough fight in New York on the horizon, Clinton is showing flashes of frustration — irritation that could undermine her efforts to unite the party around her candidacy.

According to Democrats close to Hillary and former President Bill Clinton, both are frustrated by Sanders’ ability to cast himself as above politics-as-usual even while firing off what they consider to be misleading attacks. The Clintons are even more annoyed that Sanders’ approach seems to be rallying — and keeping — young voters by his side.

Actress Rosario Dawson’s 15-minute speech at a New York City rally on Thursday, in which she rallied the crowd by crying “shame on you, Hillary” and noted that Clinton could soon face an FBI interview over the email controversy while at the State Department, underscored the growing tensions between the campaigns.

For now, Sanders is costing Clinton significant time, money and political capital. His victories in recent Western caucuses underscored her weaknesses among younger and white working-class voters, important elements of the Democratic coalition. He’s favored in the Wisconsin primary Tuesday.

Sanders is drawing sizable crowds in New York, attracting 18,500 to a rally in the South Bronx on Thursday. A victory in that state, which Clinton represented for two terms in the Senate, would deal a significant psychological blow to her campaign, rattling Democrats already worried about her high national disapproval ratings.