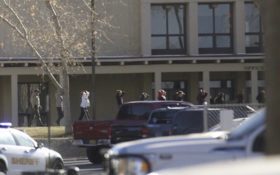 A shooting at a high school in a small New Mexico town left two students and the suspect dead, authorities said Thursday as schools throughout the area remained on lockdown as a precaution.

State police did not release any details about the shooter but confirmed the other two people who were killed attended Aztec High School. The school of about 900 students was cordoned off as authorities cleared the buildings and teens were taken to another location.

A crowd of nervous parents gathered outside City Hall to wait for more information as officers tried to reassure them about the safety of their children.

“The families of the victims were notified immediately. They are in our thoughts and prayers,” state police said in a statement on social media.

State and federal authorities are investigating what led to the shooting and did not immediately release any details about the circumstances.

Aztec is a rural community of 6,500 people in the heart of northwestern New Mexico’s oil and gas country and near the Navajo Nation. Its main street is lined by old brick buildings that date back more than a century.