He's back! Train-stealing thief at it again. - The Horn News 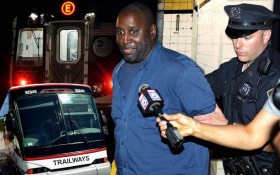 A man with a long history of pretending to be a transit worker and commandeering New York City subway trains for joy rides was arrested Wednesday after stealing a commercial passenger bus from New Jersey, police said.

Darius McCollum was arrested by officers who spotted the bus traveling down a street in Brooklyn, police said. They did not immediately say how McCollum stole the bus or from where.

McCollum become a celebrity of sorts for escapades that began in 1981 at age 15, when he piloted a subway train six stops without any passengers noticing. He grew up in Queens near a station serving two Metropolitan Transportation Authority lines and learned the mechanics of the transit system from workers who took an interest in him.

Over the years, McCollum has had more than two dozen transit-related arrests. In 2008, he was arrested for stealing a Trailways bus from Hoboken, New Jersey.

After he was paroled on the bus theft in 2013, McCollum told The Associated Press he planned to get in touch with a nonprofit to help him find a therapist, and work or vocational school.

“I’m actually happy. It was a rough process but I finally made it,” he said, adding that his outlaw days were behind him. “I can’t afford to get arrested again, I can’t deal with the jail thing — it’s too much, the gang mentality.”

McCollum was being held on Wednesday at a police station in the Park Slope section of Brooklyn. There was no immediate response to a message left with his lawyer from previous cases.