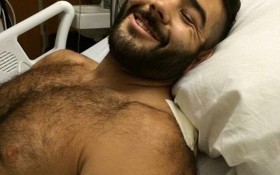 Forget the shooter – We at The Horn choose to remember heroes like U.S. Army veteran Chris Mintz.

Mintz did everything in his power to stop the Oregon community college shooter yesterday, and it took five bullets to finally bring him down. The 30-year old veteran, a father and fitness fanatic, was wounded multiple times when he charged the shooter during the assault, according to an interview with his cousin (and fellow Army veteran) Derek Bourgeois.

“‘There was no way he was going to stand around and watch something this horrific happen,” Bourgeois said. Gathering his courage, Mintz “went after the shooter” to try and save his classmates.

Mintz is currently employed at a local YMCA and is in school studying to become a certified fitness instructor, and had spent the morning Thursday wishing his son a happy sixth birthday.

Mintz is currently recovering in the hospital from his wounds. Bullets broke both of his legs, but missed all his vital organs. Mintz will have to learn to walk again, but is expected to recover, according to his family.

Our thoughts and prayers go out to Mintz and all the families affected by this senseless tragedy.