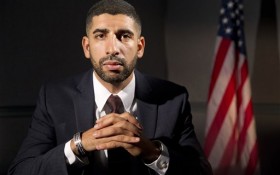 The nation’s highest military honor is to be awarded today to a former Army captain who heroically tackled a suicide bomber while serving in Afghanistan.

Florent Groberg, 32, is credited with saving fellow soldiers’ lives with his actions in August 2012. He was badly injured in the attack, which killed four people.

The ceremony takes place Thursday morning at the White House and marks only the 10th time a living service member has received the Medal of Honor for actions in Afghanistan or Iraq. Seven more were posthumously awarded the medal.

Groberg deployed to Afghanistan’s Kunar Province in November 2009 and again in February 2012. He was helping lead an escort for a meeting with an Afghan provincial governor when his unit encountered the bomber. Groberg, with assistance from another soldier in the security detail, Sgt. Andrew Mahoney, tackled him to the ground where the bomber’s vest detonated.

Groberg spent nearly three years recovering at Walter Reed National Military Medical Center and endured more than 30 surgeries.
Veterans Affairs Secretary Robert McDonald spoke about Groberg during a Veterans Day ceremony at Arlington National Cemetery. He said Groberg is emblematic of the sacrifices made by every generation of veterans.

“Captain Groberg acted in a manner that saved the lives of many of his comrades. Tragically, he could not save them all,” McDonald said. “When he was informed last month that he would receive the Medal of Honor, he said, and I quote, ‘This medal belongs to them. It’s my mission to tell everyone thank you for recognizing me, but this does not belong to me. It belongs to them. That’s how I’m coping with it mentally.’ ”