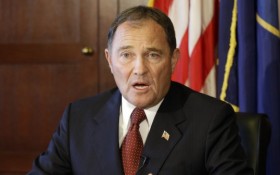 Utah Gov. Gary Herbert is finding himself playing the hero, after his move to stop Planned Parenthood’s funding in his state has found legal traction.

Conservatives around the country rejoiced when a federal judge ruled Tuesday that Utah can cut off federal funds to the state’s Planned Parenthood organization, a move the Republican governor ordered after the release of secretly recorded videos by an anti-abortion group.

The ruling from U.S. District Judge Clark Waddoups reversed an earlier decision temporarily ordering the money to keep flowing to the Planned Parenthood Association of Utah.

His ruling allows Utah to cut off funds to Planned Parenthood while the organization still pursues its lawsuit against the state.

Like Utah, other states have moved to cut funding to Planned Parenthood chapters. The organization has filed lawsuits in Arkansas, Alabama and Louisiana to block them from stripping contracts and federal money distributed by the states.

The Planned Parenthood Association of Utah sued the state in October, arguing Herbert’s move to block the money violated its First Amendment right to advocate for or perform abortions.

Herbert stopped about $275,000 in federal funds for sexually transmitted disease testing and sex education programs. His move followed the release of the undercover videos by a California anti-abortion group. The activists claim the videos show Planned Parenthood officials in Texas and other states discussing fetal tissue from abortions.

The Utah group is affiliated with other Planned Parenthood entities “that have allegedly engaged in illegal conduct,” Waddoups said in his ruling.

The judge said Utah’s government has an interest “in avoiding the appearance of corruption,” and any harm from ending the contracts is outweighed by the risk to the state if it’s denied its right to end contracts at will.

Allowing the contracts to continue, Waddoups said, could reasonably be perceived by Utah citizens as approval of wrongful conduct.

In a statement Tuesday, Herbert said he appreciated the judge’s ruling and that it recognized his power to make contract decisions on Utah’s behalf.

Herbert said he will work with the state’s health department and others to ensure that residents still have access to the STD and sex education services.

Herbert has said he was offended by the callousness of the discussion shown on the videos.

Utah’s move to cut off funding followed similar moves against Planned Parenthood chapters in other states.