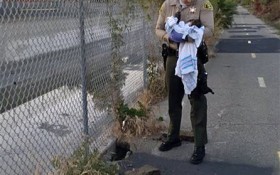 Los Angeles County sheriff’s Deputy Adam Collette knelt on the asphalt and heard the muffled cries of a baby who had been buried alive.

He pried up two large pieces of asphalt, dug out loose dirt and plucked the newborn girl from the hole along a bike path, cradling her in his arms.

“I think the baby had a sigh of relief, and so did I,” Collette said Monday. “We kind of felt each other like, ‘Hey, everything’s going to be OK.”

The girl, estimated to be 24 to 36 hours old when she was found Friday, was healthy and in stable condition at a hospital.

“I think the baby definitely had a touch of God that day,” Collette said at a news conference.

Authorities urged the unknown mother to come forward in case she needs medical attention and also put out a call for people who might want to provide a foster home for the baby.

Collette and Deputy David Perry arrived and tried to track down the muffled cries, finally tracing it to a 2-foot-wide, semicircular hole, McDonnell said.

The hole, in the pavement at the base of a fence, was filled with loose dirt, vegetation and pieces of asphalt. Collette and his partner knelt and began removing the asphalt chunks.

Collette said even as he dug, he couldn’t believe that there might be a baby underneath until he actually saw her.

“She was wrapped in what appears to be a hospital blanket, and her face was covered with the loose dirt,” the sheriff said.

Collette, a father of two young girls, said he could tell by the child’s cries that she was hungry but not hurt. She was cold to the touch but he couldn’t see any signs of injury.

He calls her rescue a miracle.

“The sun was going down, and I think the baby had maybe 45 minutes to an hour left for someone to find it,” Collette said.

Doctors believe the child might not have survived overnight, the sheriff said.

Collette and others said they couldn’t judge the mother or the conditions that drove her to abandon the child, though Los Angeles County has a program that allows mothers to anonymously leave newborns at fire stations, sheriff’s stations and hospitals without the threat of criminal charges.

“It’s hard to believe that someone doesn’t have a friend or a family member or someone to confide in,” county Supervisor Don Knabe said. “They get pregnant in secret, they hide the secret, then they want to throw away the secret.”

Sixteen babies have been surrendered in the county this year, and a total of 140 since 2001, Knabe said.

“We’ve had 140 courageous mothers that have done the right thing,” Knabe said. “No name, no shame, no blame.”