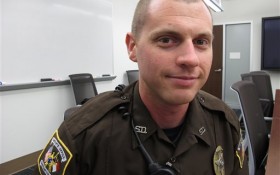 DURHAM, N.C. (AP) — The North Carolina man accused of trying to drown his two young daughters initially told residents of an apartment complex he believed his 7-year-old son had been kidnapped and needed help finding him.

It wasn’t until later that Lassiter told Scott and a 911 operator that he’d drowned his 3- and 5-year-old daughters, Scott said. Lassiter was mistaken: The girls survived after being pulled from the water by Durham County Sheriff’s Deputy David Earp, who lives nearby.

The boy had escaped and run for help, police said.

Earp said the girls were about 10 feet from a bank that slopes sharply down to the pond, which is about as long as a football field. The 5-year-old was floating and crying, Earp said. Her 3-year-old sister was fully submerged. Earp said he walked into water about 5 feet deep and snatched each one of the girls under an arm.

After getting them safely to land, Earp said he took the 5-year-old to a nearby gazebo and asked Scott and her son to watch over her.

“I knew she was terrified and I just took her off and didn’t want her to be around her sister,” Earp said.

The five-year veteran of the sheriff’s department said he and the arriving officers from the Durham police department performed cardiopulmonary resuscitation on the 3-year-old for about 15 minutes until medical help arrived.

According to authorities, Lassiter threw the girls into the pond surrounded by apartment buildings.

Lassiter said so himself, during a 911 call Sunday night. Between expletive-laden rage and distraught sobs, he told a dispatcher officials had tried to take away his children as he dealt with a personal problem.

Lassiter was charged with three counts of attempted murder: one count for each of the girls and a third for their 7-year-old brother. Lassiter was jailed, with bond set at $2 million, pending a hearing next month. Earp, 26, who has no children of his own, says the life-or-death episode continues to reverberate for him.

“It plays over in my mind a lot, as I’m sure with any person,” Earp said. “Hopefully these kids will push through.”