McCain's vacant seat could be filled by... WHO!? - The Horn News 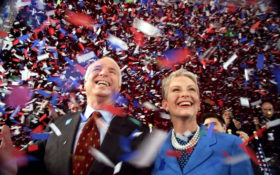 Following the death of Arizona Senator John McCain, the task of appointing a Republican to replace the war hero is in the hands of Republican Governor Doug Ducey.

While McCain was still alive, Ducey refused to discuss a possible replacement. But, according to some critics, the next in line for the Arizona office could be in the family lines… none other than McCain’s wife, Cindy.

When speaking on a local radio station in December, Ducey explained that those who were lobbying for the former senator’s seat as he was battling cancer, “basically disqualified themselves by showing their true character.”

Arizona law states that McCain’s replacement will be selected by gubernatorial appointment and must be a member of McCain’s party. The chosen candidate will fill McCain’s vacant spot for two years and in 2020, a special election will decide who will fulfill McCain’s remaining term in the Senate.

The seat will be officially up for a reelection in 2022.

On Saturday, a spokesman for Ducey released a statement explaining, “Out of respect for the life and legacy of Senator John McCain and his family, Governor Ducey will not be making any announcements about an appointment until after the Senator is laid to rest.”

Although possible appointees have not yet been named, speculation has grown over whether or not Ducey will appoint Cindy to the seat.

In May, the Politico reported that Ducey and his wife met with McCain and Cindy — setting off a firestorm of speculation.

Twitter users responded to the conspiracy on Monday… and many were not happy.

Nope, That's how Pelosi got there. She took her Father's place!

I thought #US was a democracy rather than a generation based theocracy !!!

The McCain family as had that seat for 35 years we need that seat to turn red for once….need a true conservative not a moderate Democrat….

Ducey, who is up for reelection in November has stated he has no plans to replace McCain in the Senate. Many conservatives have stressed to Ducey that they would like to see a President Donald Trump supporter filling the vacant seat.

Ken Bennett, the former secretary of state who is challenging Ducey, tweeted on Saturday, “86 days and Gov @dougducey still NOT denying he will appoint Cindy McCain. Lack of leadership.”

86 days and Gov @dougducey still NOT denying he will appoint Cindy McCain. Lack of leadership.

Cindy is a successful businesswoman and philanthropist, but Americans would like to see a Trump supporter take over the seat.

It is time for a conservative to hold the vacant seat and provide an easy Republican vote so that there is not another family dynasty in politics.