Here's when Amy Coney Barrett will be confirmed - The Horn News 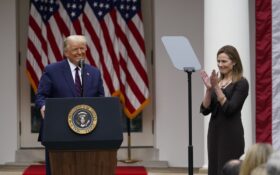 President Donald Trump has chosen Judge Amy Coney Barrett to replace the late Ruth Bader Ginsburg, sending the nomination to the Senate with hopes of a quick confirmation fewer than 40 days before the presidential election.

According to rank and file Republicans, a date has been locked in: The week of Oct. 26th.

Once the committee approves the nomination, it goes to the Senate floor for a final vote. This could all happen by Nov. 3 if the process goes smoothly.

Graham said he hopes the committee can move the nomination to the Senate floor by the week of Oct. 26 for a confirmation vote.

In fact, he says the job could be finished by Oct. 22, to be exact.

“More than half of the Supreme Court justices who have had hearings were done within 16 days or less, so we’ll start on Oct. 12,” Graham assured Fox News viewers. It will consist of a day of introductions, and two days of questions — where Democrats are expected to make a strong push against Barrett’s nomination.

Barrett will make her first appearance on Capitol Hill on Tuesday, meeting with Senate Majority Leader Mitch McConnell, Graham, and other members.

McConnell does appear to have the votes. Republicans control the Senate by a 53-47 margin, meaning he could lose up to three Republican votes and still confirm a justice, if Vice President Mike Pence were to break a 50-50 tie.

There isn’t much Democrats can do to stop the vote. Republicans are in charge and make the rules, and they appear to have the votes for Trump’s nominee. Democrats have vowed to oppose the nomination, and they are likely to use an assortment of delaying tactics. None of those efforts can stop the nomination, however.

But Democrats will also make the case against the nomination to voters as the confirmation battle stretches into the final weeks — and maybe even the final days — of the election season. They say health care protections and abortion rights are on the line, and argue the Republicans’ vow to move forward is “hypocrisy” after McConnell refused to consider President Barack Obama’s nominee, Judge Merrick Garland, several months before the 2016 election.

Republicans are defending 25 of the 38 Senate seats that are on the ballot this year, and many of their vulnerable members were eager to end the fall session and return home to campaign. The Senate was originally scheduled to recess in mid-October, when the hearings are now expected to begin.

While some senators up for reelection, like Collins, have opposed an immediate vote, others are using it to bolster their standing with conservatives. Several GOP senators in competitive races this year — including Cory Gardner in Colorado, Martha McSally in Arizona, Kelly Loeffler in Georgia and Thom Tillis in North Carolina — quickly rallied to Trump, calling for swift voting.

Republicans could still vote on Trump’s nominee in what’s known as the lame-duck session that takes place after the November election and before the next Congress takes office on Jan. 3. No matter what happens in this year’s election, Republicans are still expected to be in charge of the Senate during that period.

The Senate would have until Jan. 20, the date of the presidential inauguration, to act on Trump’s nominee. If Trump were reelected and Barrett had not been confirmed by the inauguration, he could renominate her as soon as his second term began.