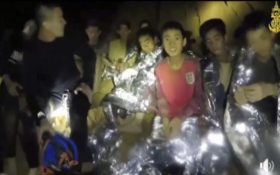 The day-to-day pearls of wisdom imparted by coaches to players — from youth sports, to high school, to college and even the pros — are well-known: Try your hardest, don’t lose focus, support your teammates, keep your chin up.

Sometimes, heeding that advice can lead to winning a game or a championship.

In the case of the 12 youth soccer players trapped in a flooded cave in Thailand, it may have helped save their lives.

Unsure of their prospects for more than two weeks while they awaited rescue , the kids and their coach found themselves in a life-and-death struggle that placed an acute focus on the value of teamwork, positive attitude and strong leadership.

Everyone made it out alive, in no small part, according to rescuers and sports experts, because they listened to their coach, Ekapol Chanthawong, or “Coach Ake,” and remembered the lessons athletes have been absorbing on soccer pitches, basketball courts and baseball diamonds for decades.

“The role of sports is that sports skills become life skills,” said John O’Sullivan, founder of the Changing the Game Project , which teaches about the value of sports in everyday life. “It’s learning to work with others, depending on your teammates, trusting them. These things become life skills when they’re intentionally taught through sports. These kids had to use these sports-life skills much sooner than they might have hoped for.”

The best in the coaching business are often those who master the art of subtly instilling habits that can carry over to different venues later in life. The general idea: Making a good pass won’t necessarily lead to a win that day. But doing all the small things it takes to be a good teammate could have a profoundly positive effect down the road.

“The lesson isn’t always the outcome,” said John Tauer, the title-winning basketball coach at Division III University of St. Thomas in Minnesota, who also teaches social psychology. “We talk about it all the time. We don’t control the outcome. We control the effort and how we play together.”

In the case of the cave ordeal, he said, “it was, ‘How do we get through the next five minutes together?’ It was staying calm if someone’s panicking. Doing all those little things put them in a situation where they could achieve that goal.”

Chanthawong spent nearly a decade as a Buddhist monk and learned the art of meditation — a skill that may have conveyed a sense of calm to the boys, ages 11 to 16, as they awaited rescue while the days turned into weeks.

He had also spent lots of time with the kids before the harrowing trip. The team’s off-the-field adventures included cycling trips, river rafting, swimming in waterfalls and exploring caves.

They were the sort of team-building trips that coaches use to build rapport among teammates who might not otherwise see each other off the field. Those kinds of bonding experiences can also serve to establish the coach as a trustworthy figure.

“Trust isn’t just about his ability to coach soccer,” O’Sullivan said. “It’s about his connection to these kids. It’s about being dependable, believable, vulnerable and all these other things. When you go into this situation where it’s ‘I’m going to try to save your life,’ that’s when trust really, really matters.”

There were other teams at work saving the kids — up to 100 military rescuers, including Thai Navy SEALs, all of whom took part in teambuilding exercises of their own.

The head of the U.S. rescue contingent , Derek Anderson, described the soccer team’s survival and rescue as the ultimate example of teamwork. He said the boys were “incredibly resilient.”

It took about nine hours to extract each of the 12 trapped players and their coach from the winding cave. Each player had to wear diving equipment and make it through a maze of dark waterways.

“The lesson here is about doing things the right way, trusting that we’re all on the same page, and then, at some level, it’s rolling the dice,” Tauer said. In sports, as in the cave crisis, “a leader tries to put you in a spot to do everything to the best of your ability. But then, you’ve got to trust.”