Revealed! Here's who Mueller wants to interview next... - The Horn News 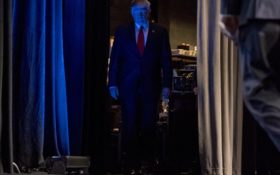 Special counsel Robert Mueller’s team of investigators has expressed interest in speaking with President Donald Trump as part of a probe into potential coordination between Russia and the Trump campaign, a person familiar with the matter said Monday.

The prospect of an interview with the president has come up in recent discussions between Mueller’s team and Trump lawyers, but no details have been worked out, including the scope of questions that the president would agree to answer if an interview were to actually take place, according to the person. The person spoke to The Associated Press on condition of anonymity to discuss the ongoing investigation.

When or even if an interview would occur was not immediately clear, nor were the terms for the interview or whether Trump’s lawyers would seek to narrow the range of questions or topics that prosecutors would cover. Trump’s lawyers have previously stated their determination to cooperate with Mueller’s requests.

It’s not surprising that investigators would ultimately seek to interview the president given his role in several episodes under scrutiny by Mueller. Any interview of Trump would be a likely indication that the investigation was in its final stages — investigators typically look to interview main subjects in their inquiries near the end of a probe.

Mueller for months has led a team of prosecutors and agents investigating whether Russia and Trump’s Republican campaign coordinated to sway the 2016 election, and whether Trump has worked to obstruct an FBI investigation into his aides, including by firing the FBI director, James Comey.

Comey has said that several months before he was dismissed, Trump told him he hoped he would end an investigation into his former national security adviser, Michael Flynn.

Mueller’s team recently concluded a series of interviews with many current and former White House aides, including former chief of staff Reince Priebus and the president’s son-in-law, Jared Kushner.

Four people have been charged so far, including Flynn, who pleaded guilty in December to lying to the FBI about his conversations with the Russian ambassador. Former campaign chairman Paul Manafort was indicted on charges tied to foreign lobbying work.

Peter Carr, a spokesman for Mueller, declined to comment, as did Trump lawyers John Dowd and Jay Sekulow.

Trump did not rule out the possibility of being questioned by Mueller when asked about it at a news conference Saturday. He said there had been “no collusion” and “no crime.”

A White House spokesman pointed to a statement from White House lawyer Ty Cobb saying the White House doesn’t publicly discuss its conversations with Mueller but was continuing to cooperate “in order to facilitate the earliest possible resolution.”