Here's a look at the top Super Bowl ads... - The Horn News 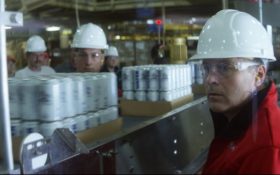 During advertising’s biggest showcase, tame humor and messages about social causes ruled the day. Slapstick humor, sexual innuendo and chest thumping patriotic messages were, for the most part, nowhere in sight. After a divisive year, advertisers during the Big Game worked overtime to win over audiences with messages that entertained and strove not to offend.

Here’s a look at the winners and losers during the biggest advertising showcase of the year.

Budweiser , as always the largest advertiser during the game, eschewed the usual puppies and Clydesdales to showcase employees that send water to places in need.

The NFL scored with a charmer that showed New York Giants quarterback Eli Manning and wide receiver Odell Beckham Jr. performing the choreography from the movie “Dirty Dancing” — complete with their version of Patrick Swayze’s iconic lift of Jennifer Grey.

Comedian Keegan Michael-Key cut through complex jargon to put things plainly in a humorous ad for Rocket Mortgage by Quicken Loans. When a restaurant patron is confused by a “beef-protein gluten-free pate,” Michael-Key explains: “It’s a burrito, filled with plants pretending to be meat.”

Tide took a novel approach with “Stranger Things” actor David Harbor in ads that poked fun at typical Super Bowl commercials. Harbour popped up in familiar-looking ads that appeared to be about different products: a car, an insurance company, jewelry and Old Spice (another P&G product). The twist? They’re really all Tide ads, because there are no stains on anyone’s clothing.

Diet Coke attempted to be quirky by showcasing a woman awkwardly dancing to a rap song, but it garnered a lot of negative comments on social media when the approach came off more weird than quirky.

“It has no clear message and it’s not really interesting,” said Kimberly Whitler, a marketing professor at the University of Virginia.

Ram trucks used a speech by Martin Luther King, Jr., to illustrate its motto, “Built to Serve.” The ad, timed to the 50th anniversary of the speech, showed people doing good deeds. But some thought the connection to the civil rights hero was too tenuous.

“Ram is being heavily criticized for its spot,” said Tim Calkins, marketing professor at the Kellogg School of Management at Northwestern. “The use of MLK to promote Ram trucks strikes many people are crass and inappropriate.”

The tax preparer used a monster under the bed to allude to people’s fears about doing their taxes. But some thought that the ad was too scary during a game that a lot of children were watching.

“The goal may be to introduce a new trade character that can build awareness, as in the Mucinex Man. However, this ad was a complete disaster,” Villanova University marketing professor Charles Taylor said.