Here's the latest on the Menendez bribery trial - The Horn News 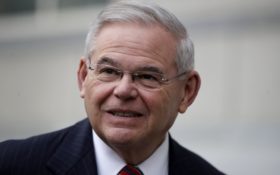 The jury at Democratic Sen. Bob Menendez’s federal bribery trial said it remained deadlocked Thursday after more than six full days of deliberations, and the judge weighed a defense request for a mistrial.

U.S. District Judge Williams Walls and attorneys from both sides began interviewing jurors in the judge’s chambers, with the senator’s fate hanging in the balance.

It was the second time in four days that the jury said it was unable to reach a unanimous verdict in the case against Menendez and his co-defendant, wealthy Florida eye doctor Salomon Melgen.

Menendez attorney Abbe Lowell said the jurors sent out a note that said they reviewed all the evidence “slowly and thoroughly and in great detail” but weren’t willing to move off their positions.

Menendez, 63, was charged with accepting luxury vacations, flights on Melgen’s private jet and other gifts in exchange for using his political influence to help Melgen. Both men denied the allegations.

The two men were charged with about a dozen counts each, including bribery, fraud and conspiracy. Menendez also was charged with making false statements for failing to report Melgen’s gifts on Senate disclosure forms.

A conviction could send Menendez to prison and cost him his seat at a time when the Democrats need every vote they can get in the sharply divided Senate.

During the trial, defense attorneys argued that the two men are longtime pals and that the gifts were not bribes but expressions of friendship.

The jury deliberated most of last week, then restarted on Monday with an alternate after a member was excused because of a long-planned vacation.