Here's who establishment GOP blames for Roy Moore's loss (it's not who you think!) - The Horn News 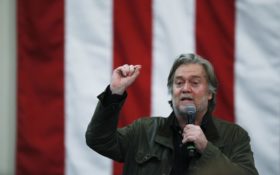 Former White House strategist Steve Bannon is catching blame from fellow Republicans for coughing up a safe Senate seat in deep-red Alabama and foisting damaging political advice on President Donald Trump. But in the aftermath of this week’s stinging Alabama defeat, Bannon is showing no signs of abandoning his guerrilla war against the GOP establishment.

Bannon wholeheartedly backed Roy Moore, the insurgent conservative who faltered in Tuesday’s special election amid allegations that he had preyed on underage girls decades ago. The accusations prompted the national party to withdraw support for its nominee for a while, but Bannon stuck with Moore, headlining rallies for the candidate and convincing Trump to extend a full-throated endorsement.

But when Moore lost on Tuesday, handing the Democrats control of their first Senate seat in Alabama in a generation, Republicans turned on Bannon. The Breitbart News head already had made scores of enemies for declaring a siege on his own party.

“This is a brutal reminder that candidate quality matters regardless of where you are running,” said Steven Law, head of the Senate Leadership Fund, a super PAC for Republicans aligned with GOP leadership. “Not only did Steve Bannon cost us a critical Senate seat in one of the most Republican states in the country, but he also dragged the president of the United States into his fiasco.”

Bannon’s team vowed that its revolution would continue, insisting that Senate Majority Leader Mitch McConnell should be the one to take the blame.

Bannon’s allies dismissed the Alabama loss as little more than a temporary setback that would soon be forgotten. They expect that the Republicans cheering Moore’s loss will simply enrage Trump’s most loyal supporters nationwide, who already suspected some Republican leaders were trying to undermine the president’s agenda.

“They’re stomping on the very base they need to turn out for their candidates in the general election in 2018,” said Andy Surabian, a senior adviser to the Bannon-backed Great America PAC. He contended that “the average Republican voter across the country is pointing their finger at Mitch McConnell and the Republican establishment.”

Bannon’s team blamed McConnell for abandoning Moore, though it was a somewhat incongruous argument after Bannon warned McConnell to stay out of Alabama when Moore won the GOP primary. On his Sirius XM radio show Wednesday, Bannon credited Democrats with “out-hustling” the GOP on the ground in Alabama — praise that doubled as a swipe at the lack of Senate Republican campaign committee field staff on the ground in the state.

The fate of Bannon’s insurgency may depend on whether he can keep Trump’s ear.

In the hours after Moore’s loss, Trump was restrained, according to a White House official and an outside adviser not authorized to speak publicly about private conversations. Some in the West Wing had hoped the loss would prompt Trump to sever ties with Bannon but the president did not seem inclined to take that step, according to the two people.

Since Bannon’s exit from the White House in August, he has remained close to the president, speaking to him frequently by phone, offering political advice and reminding Trump of his populist campaign promises. Though he had grown weary of the infighting Bannon initiated in the West Wing, Trump still valued his former strategist, telling allies that he felt that Bannon had a better feel for the president’s base than most of his advisers. He also praised Bannon’s pugnacious spirit, seeing in his former aide a brawler similar to himself.

Bannon tried to steer Trump toward Moore in the primary but the president, confronted with conflicting advice from his staff, supported incumbent Sen. Luther Strange, who had been appointed to the seat vacated by Jeff Sessions when he became attorney general. But the president was never truly sold on Strange, and publicly worried he had backed the wrong candidate.

After Moore’s primary win, an exultant Bannon believed it was the first victory of a GOP civil war and, later, urged the president to endorse Moore even after the sexual harassment allegations surfaced. Trump initially hesitated but then fully embraced Moore over objections from aides and Republican leadership.

Publicly, Trump on Wednesday addressed Moore’s loss by acknowledging he “would have liked to have had the seat” in the Senate as he and GOP lawmakers scratch for legislative victories. But Trump also said, in what could be interpreted as a dig at those in the GOP who did not back Moore, that “a lot of Republicans feel differently. They feel very happy about the way it turned out.”

Bannon’s group indicated they would forge forward with plans to challenge the GOP establishment in Senate races in as many as 10 states, including Arizona, Nevada and Tennessee, though one adviser suggested that a greater effort may be made on recruiting and screening candidates.

But in the hours after the stunning defeat, many Republicans reveled in Bannon’s failure.

Sen. Lindsey Graham of South Carolina argued that Bannon should have called off his guns and simply backed Trump’s first choice.

“When it comes to Alabama politics Steve Bannon should have followed President @realDonaldTrump lead in supporting Luther Strange,” Graham tweeted. “Trump’s instincts on the Alabama race proved to be correct.”

And Rep. Peter King, R-NY, declared that Bannon looked “like some disheveled drunk who wandered onto the political stage.”

“This is not the type of person we need in politics,” said King said. “(Bannon) sort of parades himself out there with his weird alt-right views that he has, and to me it’s demeaning the whole government and political process. And last night’s election was a manifestation of the revulsion by the American people.”