Here's who could gain from Al Franken's demise (good news!) - The Horn News 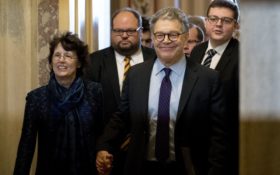 Minnesota Sen. Al Franken’s departure from the Senate solves one problem for Democrats, demonstrating their will to push out one of their own when sexual harassment allegations pile up. Now they must worry about keeping one more vulnerable seat when they already had their hands full in next year’s election.

Franken said Thursday he would resign, just a day after new allegations brought the number of women alleging he had groped or tried to kiss them to at least eight.

In a sometimes emotional speech delivered on the Senate floor, Franken said some of the accusations were false, but acknowledged he couldn’t continue.

“I know in my heart that nothing I have done as a senator — nothing — has brought dishonor on this institution,” Franken declared.

The former comedian who made his name on “Saturday Night Live” is the latest to fall in the national wave of sexual harassment allegations, coming just two days after the resignation of Michigan Democratic Rep. John Conyers, who was the longest-serving member in the current House.

His rapid fall leaves Democratic Gov. Mark Dayton to appoint a replacement to serve until at least 2018, when the state would hold an election to finish Franken’s six-year term ending in 2020. Dayton said Thursday he expected to do so “in the next couple of days.”

Franken’s exit gives Republicans an opening to expand their reach in an already favorable Senate map — two dozen Democratic senators are up for re-election next year, including 10 in states that President Donald Trump carried in 2016. That difficult math raises the question of whether Dayton will appoint a temporary placeholder or try to give a Democrat a running start for the 2018 campaign.

His lieutenant governor, Tina Smith, has been most frequently mentioned for the temporary appointment. Smith is a trusted former chief of staff for Dayton and also ran former Vice President Walter Mondale’s brief Senate campaign in 2002 after Sen. Paul Wellstone died in a plane crash. But Smith previously announced she wouldn’t run for governor next year, suggesting she would be no more than a caretaker.

Dayton could also look to a pair of fellow Democratic statewide elected officials: Attorney General Lori Swanson or State Auditor Rebecca Otto. Otto is running for governor and Swanson is thinking about it; either could conceivably turn into a Senate candidate.

While Dayton weighed his choice, eyes were already turning to the 2018 race, especially among Republicans.

Former Gov. Tim Pawlenty — the last Republican to win a statewide election in Minnesota, in 2006 — was seen as a potential heavyweight contender in the GOP. Another possibility, former Sen. Norm Coleman, quickly ruled himself out.

The timing of Franken’s departure is uncertain. Fellow Minnesota Sen. Amy Klobuchar said Franken indicated he would officially step down sometime “by the end of the year.” It’s an abrupt end for someone who had been seen as coming into his own in Washington.

Franken, 66, had gained respect as a serious lawmaker in recent years and had even been mentioned in talk about the 2020 presidential race. But his downward spiral began Nov. 16, when Leeann Tweeden, now a Los Angeles radio anchor, accused him of forcibly kissing her during a 2006 USO tour in Afghanistan.

Other allegations followed, including a woman who says Franken put his hand on her buttocks as they posed for a photo at the Minnesota State Fair in 2010. Two women told the Huffington Post that Franken squeezed their buttocks at political events during his first campaign for the Senate in 2008. A fourth woman, an Army veteran, alleged Franken cupped her breast during a photo on a USO tour in 2003.

But Franken remained defiant in his parting speech, saying that “some of the allegations against me are simply not true” and disputing the details relayed by other accusers, as he had from the start.

And he pointedly noted that he was being forced out while Trump — who has been accused of worse offenses and bragged on a leaked “Access Hollywood” videotape of grabbing women by their genitalia — emerged unscathed. Trump and fellow Republicans have also endorsed Alabama GOP Senate candidate Roy Moore, who has been accused by multiple women of sexual misconduct with them when they were teens and he was a deputy district attorney in his 30s.

“I, of all people, am aware that there is some irony in the fact that I am leaving while a man who has bragged on tape about his history of sexual assault sits in the Oval Office and a man who has repeatedly preyed on young girls campaigns for the Senate with the full support of his party,” Franken said.