Here's who was chosen to fill Al Franken's seat... - The Horn News 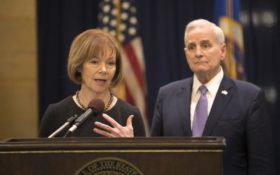 Smith was widely seen as Dayton’s top choice from the moment Franken announced his resignation last week. But her previous decision not to run for governor had raised questions about her appetite for a closely watched and expensive Senate campaign.

Smith said she is in and fully committed.

“I can tell you I shouldn’t be underestimated and if I weren’t confident I wouldn’t be doing this,” she said.

It’s not clear when Smith will head to Washington. Franken, who resigned under pressure from his own party after he was accused of improper behavior by at least eight women, announced last Thursday that he would resign “in the coming weeks.” His office hasn’t set a final departure date yet; Smith indicated it would likely be in early January.

In a statement, Franken called his successor the perfect choice but didn’t shed light on his formal resignation plans, saying only that he would work with Smith to ensure “a speedy and seamless transition.”

Smith will be the second Democrat on a path to the Senate in as many days, after Doug Jones’ victory in Alabama in Tuesday’s special election.

Smith, 59, served as Dayton’s chief of staff for four years before ascending to become his No. 2 when his previous lieutenant chose not to join him in seeking a second term in 2014. Dayton has long treated Smith as an equal in the office, and it was that deference that fueled speculation she was being groomed to succeed him.

Her path to politics was unconventional. A native of New Mexico, she graduated from Stanford and earned an MBA from Dartmouth. A marketing job with General Mills brought her to Minnesota, where she eventually started her own marketing and political consulting firm.

She managed Ted Mondale’s unsuccessful campaign for governor in 1998, then ran the short-lived 2002 Senate campaign for his dad, former Vice President Walter Mondale. Smith served as chief of staff to Minneapolis Mayor R.T. Rybak before eventually taking the same job with Dayton in 2011.

Smith, a soft-spoken, smiling presence at the Capitol, is credited with quiet but key roles in the response to the 2007 bridge collapse in Minneapolis and in the building of a new Vikings stadium. Dayton made her his point person on a massive public-private partnership to work with Mayo Clinic on an ambitious expansion in Rochester.

Next year’s race to fill the final two years of Franken’s term is certain to be one of the nation’s most closely watched and expensive, and Dayton was under pressure from fellow Democrats in Washington to ensure his pick would use the appointment as a springboard for that election.

Meanwhile, Republicans immediately floated former two-term Gov. Tim Pawlenty as a possible candidate, but many others were said to be weighing a race.

Republicans said Dayton’s selection of Smith for the seat could upset voters.

“Minnesota voters deserve a senator who will look out for their best interests, not another DFL (Democratic-Farmer-Labor Party) insider handpicked by Mark Dayton,” National Republican Senatorial Committee spokesman Michael McAdams said in a written statement.

And Smith’s past work with Planned Parenthood in Minnesota and other Midwestern states, which provides abortions along with other health services, was sure to become a flash point with Republicans on the campaign trail.