Here's the celebs that did Christmas cards best... - The Horn News 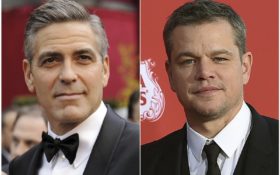 Holiday cards of the paper and stamp variety still get sent, so what does that look like celebrity to celebrity?

Hugh Jackman of “The Greatest Showman” wasn’t giving up any names, but he told The Associated Press recently there does sometimes feel like a competition this time of year.

“Some of these holiday cards are remarkable,” he said. “I’m, like, did Annie Leibovitz shoot this? We do kind of rate them a little bit. It’s horrible to say.”

Of her “Mission: Impossible — Rogue Nation” co-star, Ferguson declared that “Tom’s quite good at it.” She explained, “Usually at birthdays I’ll get Tom’s signature cake. He says it’s dairy free, wheat free, gluten free, sugar free. It’s b—s—. He just wants to fatten up everyone else around him. But I’m not much of a person who keeps in contact. You know, I shoot a movie and I move on. I have my friends and I worship and maintain that.”

Patrick Wilson, who appears in next month’s train thriller “The Commuter,” has a favorite celebrity card sender.

“The most fun holiday cards I would get were these painted cards from Phil Collins that were pretty awesome, although now that I think about it I haven’t gotten one in a few years. Phil, come on. Yeah, ’cause he paints as well. They were like of dogs and things. It was pretty great,” he said.

Liam Neeson, who stars in “The Commuter,” really appreciates a certain old friend at the holidays.

“Steven Spielberg. Since ‘Schindler’s List’ he never forgets my birthday and he never forgets Christmas,” Neeson said. “I adore him for that. And there’s years I forget to send the cards and stuff like that, but Steven is so, he’s just very, very loyal. I really appreciate that, yeah.”

Christina Hendricks, who appears in the Agatha Christie-based “Crooked House,” said other than Neil Patrick Harris and David Burtka, she has no standouts in mind on holiday cards.

“Do people still do cards? I’m so impressed,” she said.

Harris and Burtka go all out, though.

“They always do a nice one with their kids. They’re very theatrical. They like to dress up and do costumes,” Hendricks said.

“It’s so American,” he said. “We would never do that in France. We kind of laugh. When I get cards from American people that actually do that, it’s sweet but it’s just kind of, oh they still do that.”

Glenn Close, who stars in “Crooked House,” has some holiday card issues.

“I always feel guilty getting a card because I never get around to sending my own,” she laughed. “But a lot of the people that I get cards from that you would know have people who do it for them and I really don’t. I still want to have a picture taken of me and my little dog and send it as an e-card.”

Matt Damon, who gets small in “Downsizing,” hears from the usual colleagues in cards.

“You would think that Clooney would send out something funny, but he’s so serious now,” Damon deadpanned of his “Suburbicon” director. “You know, he’s married, he’s got kids. He’s really settled down, so I’m not really expecting anything.”