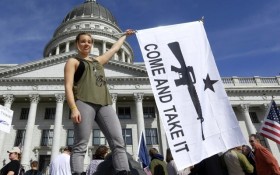 It’s been long predicted — and now if President Obama has his way, it’s finally coming.

Obama’s cronies are launching the first part of a concentrated Democratic plan to ban guns, just days after Obama used the tragic mass shooting at an Oregon community college as a rallying cry to drum up national support.

The Democratic effort is partly to keep the emotional issue alive during next year’s elections, driving up support from sympathetic voters and contributors while complicating GOP senators’ re-election campaigns in some closely divided states.

In a letter to fellow Democrats, Sens. Chuck Schumer, D-N.Y., and Debbie Stabenow, D-Mich., wrote that the party’s effort “will be a rallying point for a public that is eager for congressional action and will be the basis for future legislation that we will demand” receives a Senate vote.

Democrats said this first attack would include broadening federal background checks, now required only for sales by federally licensed firearms dealers, to cover all purchases – even at gun shows and online.

They said they would propose making it harder for people to buy guns by extending background checks for an undisclosed length of time.

They also said they would seek to greatly enhance the list of those prohibited from purchasing firearms, and make it a federal offense to be a so-called ‘straw purchaser’ – that is, someone who buys a firearm and then resells it to somebody else.

Democrats would use procedural delays to thwart legislation if Republicans refuse to allow votes on the gun proposals, a Democratic aide said Wednesday who wasn’t authorized to discuss the plans publicly and requested anonymity. Schumer and Stabenow are leaders of Senate Democrats’ messaging efforts.

President Barack Obama plans to travel to Roseburg, Oregon on Friday to meet victims’ families. As he has after several mass shootings, he has called on Congress to strengthen gun restrictions, and it looks like his Democratic underlings are starting to make their move.