Herd of elephants blocks traffic in Oklahoma - The Horn News 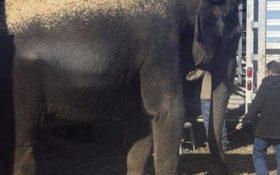 Talk about hitchhikers you really can’t pick up: Four circus elephants were briefly stuck along an Oklahoma road waiting for a ride.

The Oklahoma Highway Patrol says a truck carrying them to Iowa broke down Wednesday.

Trooper Dwight Durant said Thursday that the floor of the trailer carrying the pachyderms had started to give way and was dragging on the road, sparking grass fires along the way.

The elephants disembarked near Eufaula, about 120 miles (190 kilometers) east of Oklahoma City, after someone noticed the problem from another vehicle traveling behind the truck.

The elephants were transferred to another trailer and moved to a nearby veterinarian’s property before another vehicle arrived to take them to Iowa.

Durant said the elephants belong to Carson & Barnes Circus, based in Hugo, Oklahoma.